My brother
Gerald is 10 years younger
than I and he always has been.  His
parents were 10 years older than mine,
of course, and that made a big difference.
Mine were young, energetic, and so full of
the process of building a life together that
they didn’t take a lot of time to enjoy it.
His parents were wiser, more tired,
and more into living their life
than building it.

Otherwise, it
was the same house and
home with much of the same stuff
to play with in the garage, the kitchen,
and the yard.  An Interstate freeway came
behind the house the year he was born, so
he had less freedom explore the forest –
right out the back door for me but
across four lanes of heavy
I-5 traffic for him.

Gerald has
always been an explorer,
an innovator, and a masterful
messer-arounder.  All kids take things
apart and Gerald did too.  But unlike most
of the rest of us, he usually got them running
again and didn’t always have to take
them apart to figure out how
they worked.

One day when
Gerald was about five, the
four of us sat in the kitchen slicing
cucumbers (Gerald called them pickles) for
Grandma Dale Pickles, a slice at a time with paring
knives.  That yearly ritual took forever, and though
I loved Grandma Dale Pickles I dreaded slicing
with a passion.  Gerald was too small
to get much slicing done, but he
had a knife and a cucumber
like the rest of us.

Suddenly he
asked, “Daddy, why do
we cut pickles this way, with a knife?”
Dad just looked at him, then said something like
“That’s just how to do it, Gerald.  It takes a long
time and we all have to help get the job done”,
hoping that would be the end of it.

“But Daddy,” he replied,
there’s another way to slice them. See
that thing up on the wall, right
over your head?”

It was
Grandma Gass’s
old wooden sauerkraut slicer,
the kind with 5 blades and a cabbage
holder that slid back and forth on rails.  It
had been hanging there for years without
anyone but Gerald ever really seeing
it, and for us it was a historical
artifact, a knick-knack,
or a trinket.

For him it was something
to explore in his
mind’s eye.

“My hands
are really little and I
could only hold 2 pickles in the slicer
and every time I pushed I’d get 10 pickles,
but you could hold 5 pickles and get 25 pickles
every push.”  Dad grinned, got up from the table,
rinsed the dust off the slicer at the sink, and
sliced at the speed of light til the cucumbers were
gone.  That was the end of our family slicing
tradition, the start of  a high tech pickle
slicing era, and the beginning of
my admiration for Gerald
as an innovator.

A couple of
years later we were at
the table again, this time over
waffles on Sunday morning.   Gerald
asked “Daddy, where do the fishermen get
their worms?”  “I don’t know for sure, Gerald,
but I imagine they get them in the back yard, like
we do.”   “But fishermen don’t all have back yards,
ours gets watered more than most people’s,
and most people don’t put compost
on it.  I’ll bet we have a lot
more worms.

Within a couple of
weeks the GG Worm Farm
was in operation, complete with a pink,
worm-shaped sign out by the road.  Word
got around and fishermen began to stop by for
worms.  He offered both red worms and night crawlers
and could advise fishermen about which to buy. Before
too much longer the Big Liquor and Sporting Goods
store downtown was carrying his worms in ice
cream cartons guaranteeing at least
13 worms to the dozen after a
week in the cooler.

“Hi, this
is Gerald”, he’d say on
the phone, “and I was wondering
did you need any more worms?”   He
invested some of his profits in large concrete
worm pits, helped organize a collection service
for neighbourhood leaves and compost, cutting
down smoke and feeding worms, and Dad and
I scouted sources of organic material and found
some fantastic ones.  The more worms Gerald
sold and the more food he fed to them, the
more compost was available for the
lawn and garden, the happier
retailers &  fishermen got
and the richer
Gerald got.

At its peak, the GG
Worm Farm supplied worms to
stores in 3 towns: Dunsmuir, Mount
Shasta, and McCloud.  Gerald paid phone
charges to manage accounts and gas money for
parents to deliver.  When he was too much a kid to
do all the counting himself he paid Mom to count for
him (up to a point).  Large trucks delivered crates of
cartons and a small, businessman wrote out checks.
He made so much money he had to have a business
license!  Gerald learned a lot on the GG Worm
Farm, and by the time he and his friends
organized a rock-and-roll band, he
was the money manager
for the whole band.

He was
so good at saving
that his partners could buy
equipment they couldn’t have
afforded managing their own $$.
According to him back then, how much
money he had had more to do with how
much he spent than with how much he
made.  According to his wife Joan
now, they still live like that
and love the freedom
and opportunity it
affords.

Gerald
continued to innovate.
After working on the engineering crew
and section gang for a decade he left the railroad,
went to chefs’ school, worked in fine restaurants in
San Francisco for a few years, then they moved an
hour north to Santa Rosa, where he worked in
various places hoping for the chance to
design and prepare the best
food possible.

One day
he got a call from Joyce
Goldstein, his former employer at
Square One in the city, where I once
enjoyed the best meal I had ever had.
She said “A friend of mine will call
you.  I strongly suggest
you pay attention
to her”.

He got the call
and he paid attention. It
was Nan McEvoy, granddaughter
of the founder of the San Francisco Chronicle
newspaper and the owner of an entire small
watershed in Marin County, west of Petaluma
on the county road to the coast.  She was
building what she called The Country
Kitchen and wanted a private
chef to run it.

Nan bought
the land because it was
beautiful and she loved having a
place for her grandchildren to play, but
because it was zoned for agricultural use she
had to grow something. She decided to grow and
produce the best olive oil in North America, hired
the best Italian consultant who brought stock of
the best olives to grow on her land and he and her
local staff of experts have been caring for them
for a decade and a half.  In addition to its own
frantoia and bottling facilities, the ranch has
wonderful landscaping and stonework,
a country home for Nan and various
other buildings including the
Country Kitchen where
Gerald works.

McEvoy Ranch  olive
oil is indeed the finest on
the continent and Gerald is the
private chef at the ranch. He makes
anything he wants and Nan and the
ranch staff love his cooking.  Gerald’s
own cookbook came out in 2004.
The Olive Harvest Cookbook:
Olive Lore and Recipes from McEvoy Ranch 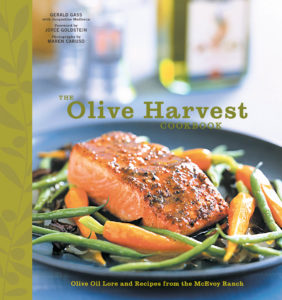 I love
visiting him at the
ranch, partly to enjoy his
company and his cooking, to watch
him cook, explore the ranch, its Henry
Moore sculpture, gardens, stonework, and
collect chanterelles.  The conversations
at the family-style luncheon table are
so interesting, that often I feel like
a young Michelangelo at the
table of Lorenzo di Medici,
listening to the buzz.

I will close with one
more story about Gerald. It
returns to the theme I began with,
he is a champion messer-arounder and
experimenter looking for new ways to do things.
After we had cleaned up after lunch on my first visit
to the ranch, when he had worked there less than a
year, he got that special look in his eye that told
me something and said “I’ve got some things
to show you down in the basement”,
where, in rows and columns on
shelves, dozens of jars of
olives cured.

His job had
nothing to do with olives,
olive oil production or inventing
olive oil cuisine.  But just because
he was interested, batches
of olives cured in the
basement.

His experiments
didn’t matter to the production
staff and they didn’t even know about
them.  They had their own traditions,
constraints, and economies of scale
and didn’t need any help
from him.

He did it
just for the fun of seeing
“how it works” to cure an
olive.  The outcome interested
him, and that more than
justified the time
and cost.

In science
we call that curiosity-based
research which is what I did for a living.
When Gerald serves home-cured olives at
the ranch table or visits, saying “Let’s see
what we have here in my pack”, we
know we’re in for a treat.

Gerald retired
from the McEvoy Ranch in 2015,
after Nan McEvoy died.  For another short
Gerald creativity story, see the sculpture
Brotherly Love.

A large poster in an
oil and vinegar store in Campbell
River BC shows that McEvoy Ranch
organic olive oil is still the finest
North American olive oil.

4 thoughts on “Creativity: The Case of Gerald Gass”