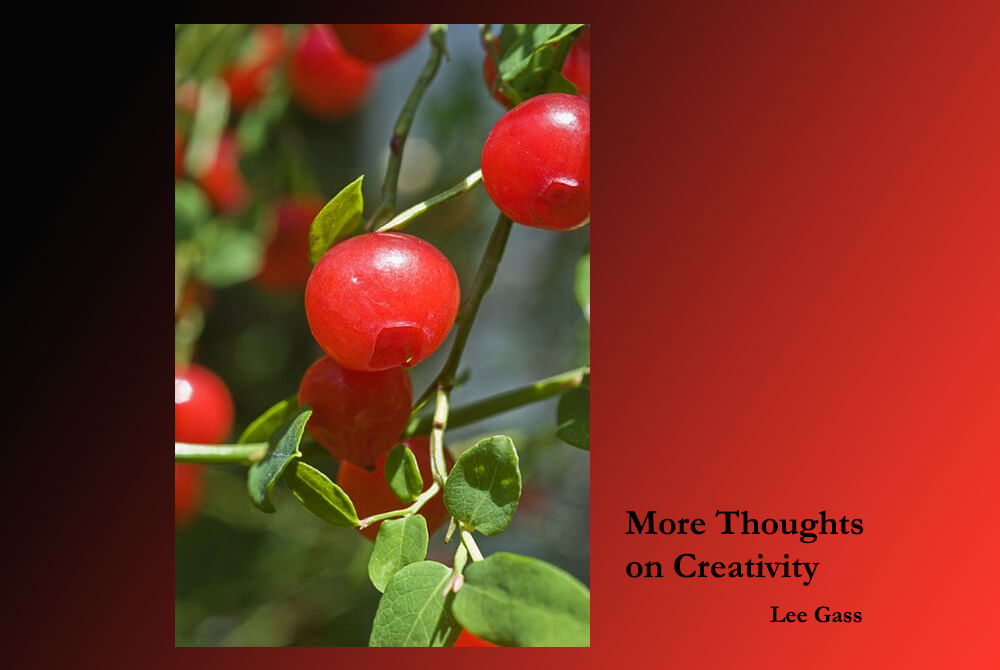 Wild huckleberries on a bush
outside my studio.

In a story
about a nest of robins in
my outdoor sculpting studio, The
Deep Meaning of Creativity, I  suggested
without ironic intent that on the deepest level,
to be creative involves the creation of creative off-
spring. We all know that this is sooner said than
done and it may be a stretch for many of us to
think of robins as creative at all.  But these
robins operated outside the box in
picking their nest site, which
was in an industrial
zone.

Loud, sometimes
unpredictable noises, clouds
of stone dust, muddy spray, and always
activity on my part.  It makes a certain kind
of sense for robins to be willing to get used
to my carving.  It’s out of the rain, sunny
in afternoon, not frequented by
predators, who avoid me
like the plague.

Without
addressing seriously
either what creativity is or
whether creativity as we normally
think of it can occur in non-human animals,
I want to go beyond that issue, briefly, to consider
organisms I would have difficulty even imagining
as creative, yet which are undoubtedly
engaged in creating offspring.
Wild huckleberries.

If you insist on
my keeping strictly to the theme
of creativity then consider the ice cream
that is the real subject of this story.  Lucretia raises
raspberries, strawberries, blueberries, goumi berries,
and black currants in our large garden, and the
forest around us also produces edible berries,
like salmonberries in large numbers
in early summer and huckle-
berries a little later.

We always
have a couple of kinds
of homemade ice cream in our
freezer, and in preparation for the
arrival of a whole passel of family
for a week of fun we’ve been
stocking up on a variety
of our favourites.

Sadly, though
berries are the basis of most
of our ice creams, few blackberries
grow on the northern half of Quadra
Island. Though salmonberries are available
in untold thousands, are easy to pick, and have
a lovely, subtle taste, they are also quite watery
and many people don’t use them at all. But
they reduce to a powerful syrup that
is truly amazing, and I make 10
or 15 liters of salmonberry
ice cream a year.

If salmonberry
ice cream is wonderful when
made to heighten its natural potency,
then huckleberry, as I said in Postscript on Wild
Huckleberry Ice Cream, is “la crème de la crème,
near the pinnacle of the ice cream maker’s
art and so precious and rare that few
have ever known, first-hand, its
superb taste, texture,
and colour”.

Huckleberries
are also small, slow to pick,
and tend to be dispersed widely through the
forest.  The plants prefer to grow out of old conifer
logs and stumps in sunny but moist settings.  In some
years it is an absolute pain to collect enough of them to
make even one batch of ice cream, and that is a pity.
But no pity is needed this year and no sympathy
at all, for this is an absolute bumper year
for huckleberries on the east coast
of Quadra Island in at
least four senses.

The berries are
larger than usual – – on average,
maybe twice last year’s diameter, and
the largest are almost as big as small grapes.
Twice as big is eight times as heavy, of course,
eight times as much flavour, and eight times more
useful for making ice cream. To make matters, well,
even sweeter, it takes less time to pick a big berry
than to pick a small one. They are easier to see,
easier to grasp with fingertips and easier to
hold so more get in the bucket and fewer
on the ground.  It all adds up to
picking flavour faster.

Picking is a
pleasure this year,
and if I should happen to
pop a berry into my mouth instead
of my bucket from time to time, it
literally explodes with flavour
and moisture when
I bite into it.

It is such a gratifying
thing to eat one huckleberry
and be satisfied!

Like a siren,
one bush outside my
office window demanded
my attention. Each morning when
I sat down to write, it was redder and more
insistent than the day before, and early morning
sunlight made its berries glow in a way I
could not ignore.  A couple of
days ago I couldn’t stand
it any more.

In a few
minutes, I harvested
enough for at least 10 liters
of ice cream from that one small
bush and there are many more bushes.
I was ecstatic. I was ecstatic while I
picked the berries, I will be ecstatic
when I make the ice cream,
and it will be an absolute
joy to share the result
with my family.

What an
old tradition it is
to harvest berries from the forest!
What an old economy, and an old set of
considerations to be aware of
in making our way in
the world.

Since reading
Douglas Deur and Nancy
Turner’s superb book Keeping it
Living: traditions of plant use and cultivation
on the northwest coast last winter, I’ve carried
pruning shears as I picked. In one chapter Dana
Lepofsky and Ken Lertzman showed that the Sto’lo
people of the Fraser Valley picked blueberries in
the mountains, then pruned bushes and burned
to enhance productivity on a second
trip after picking season.

The Sto’lo example
was one of many in the book showing
that aboriginal people on the BC coast not only
harvested many natural products (they hunted or
gathered them), but they actively managed the
resource, husbanding the habitat to enhance
the growth and productivity
of useful species.

Creative Natives in Clayoquot Sound
is also on the theme of harvesting from nature.

One thought on “More Thoughts on Creativity”