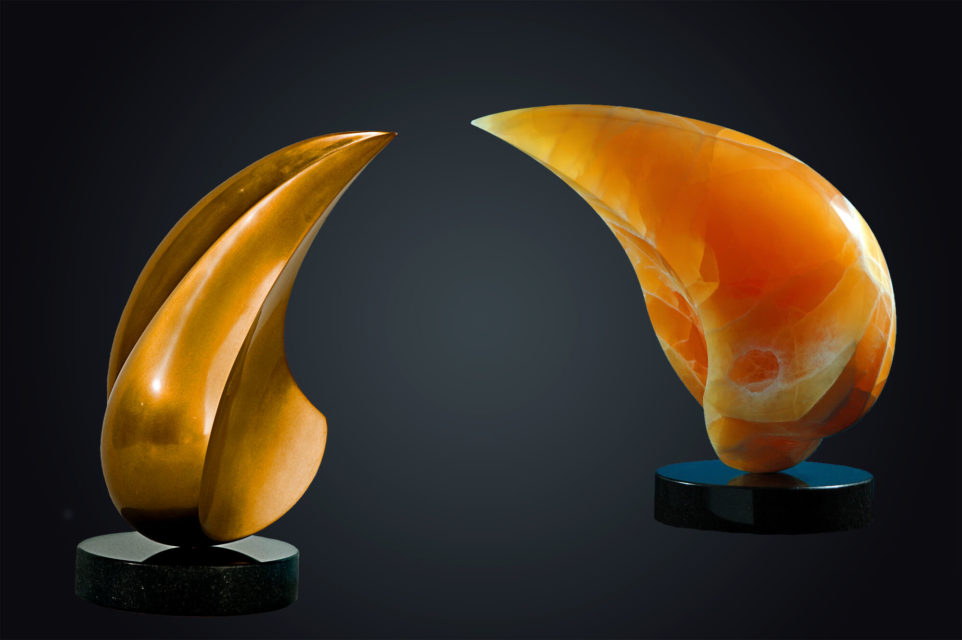 I couldn’t believe my eyes when I saw this translucent stone.   I developed a suggestion of movement in the raw stone  as I shaped Eternal Flame to allow twin convex upper surfaces collect light from all directions and make twin shadowed, concave lower surfaces glow.  The sculpture rotates on its base to take advantage of this effect, which varies with the viewing conditions.  Independently of the translucency of the stone, the form of Eternal Flame itself is beautiful in indoor and outdoor settings.   Bronze versions are available at any scale. 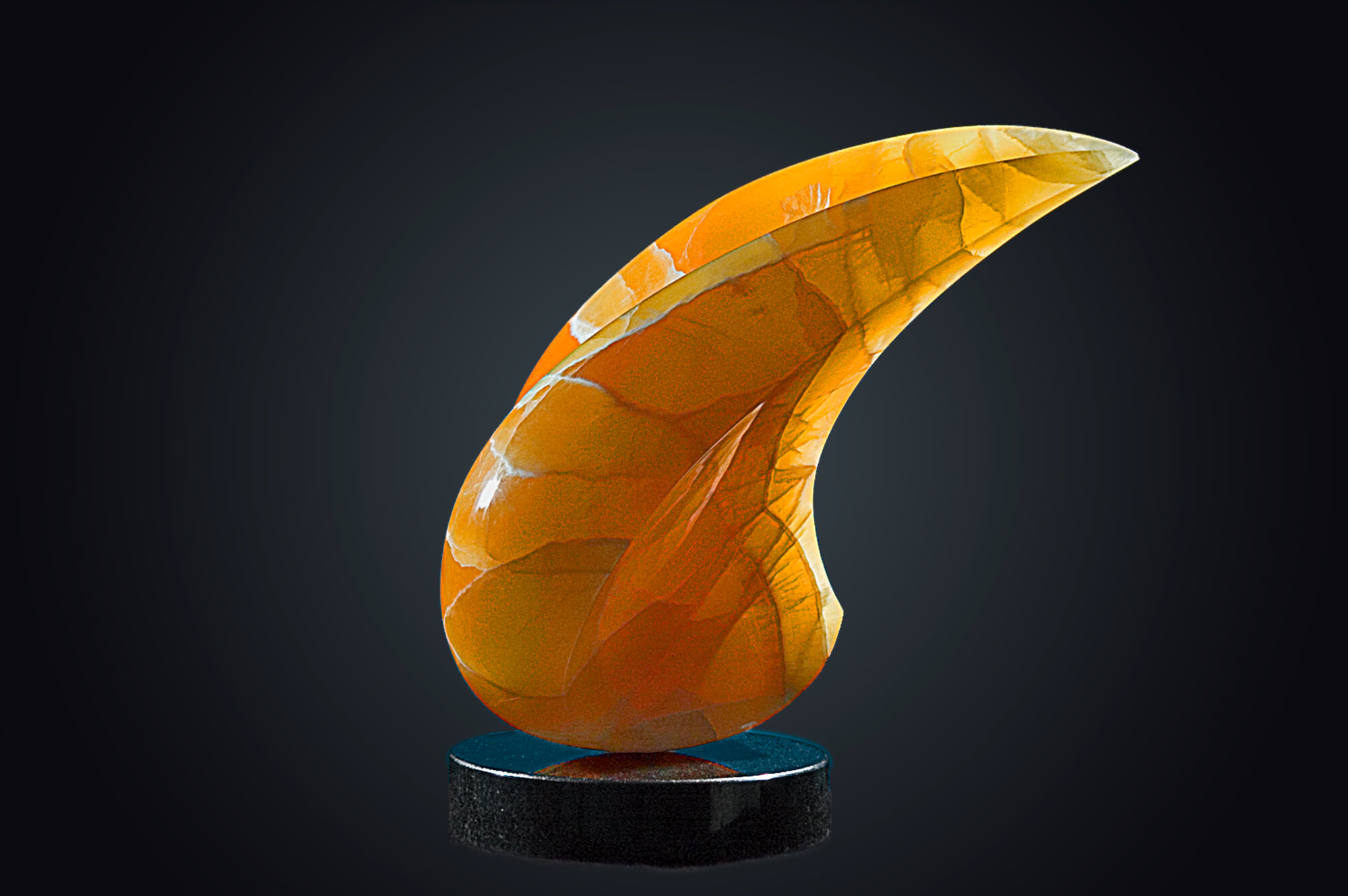 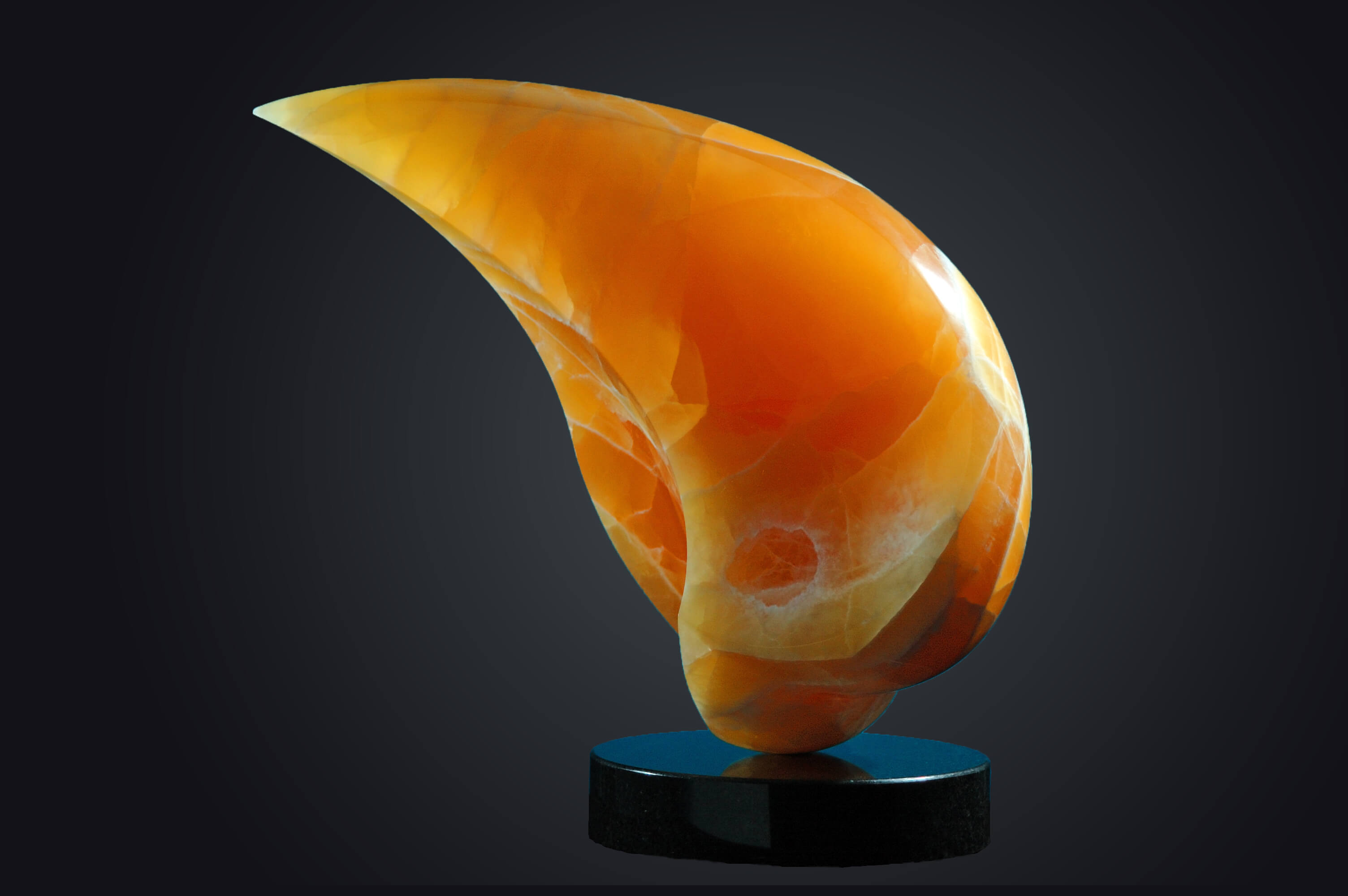 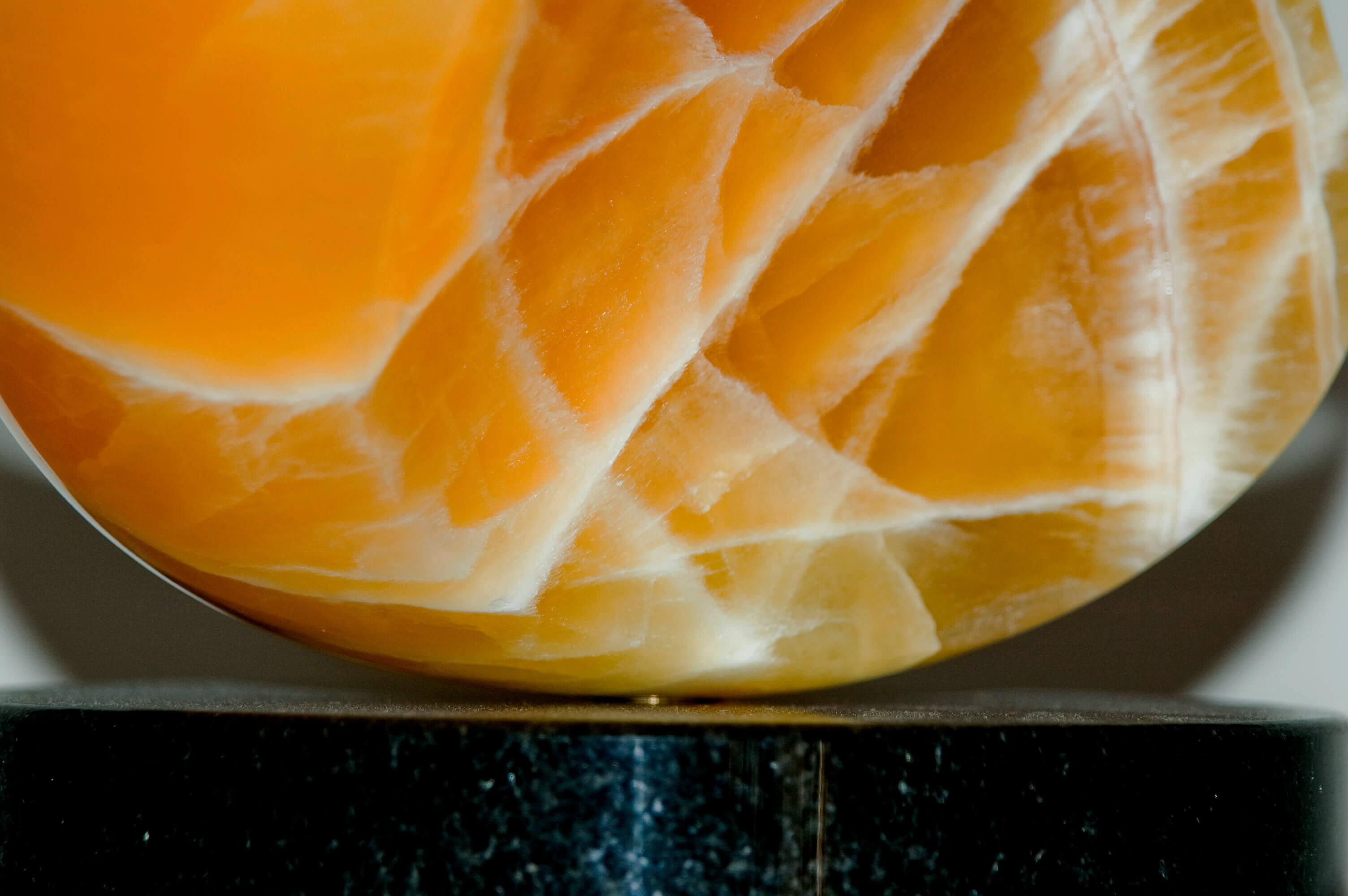 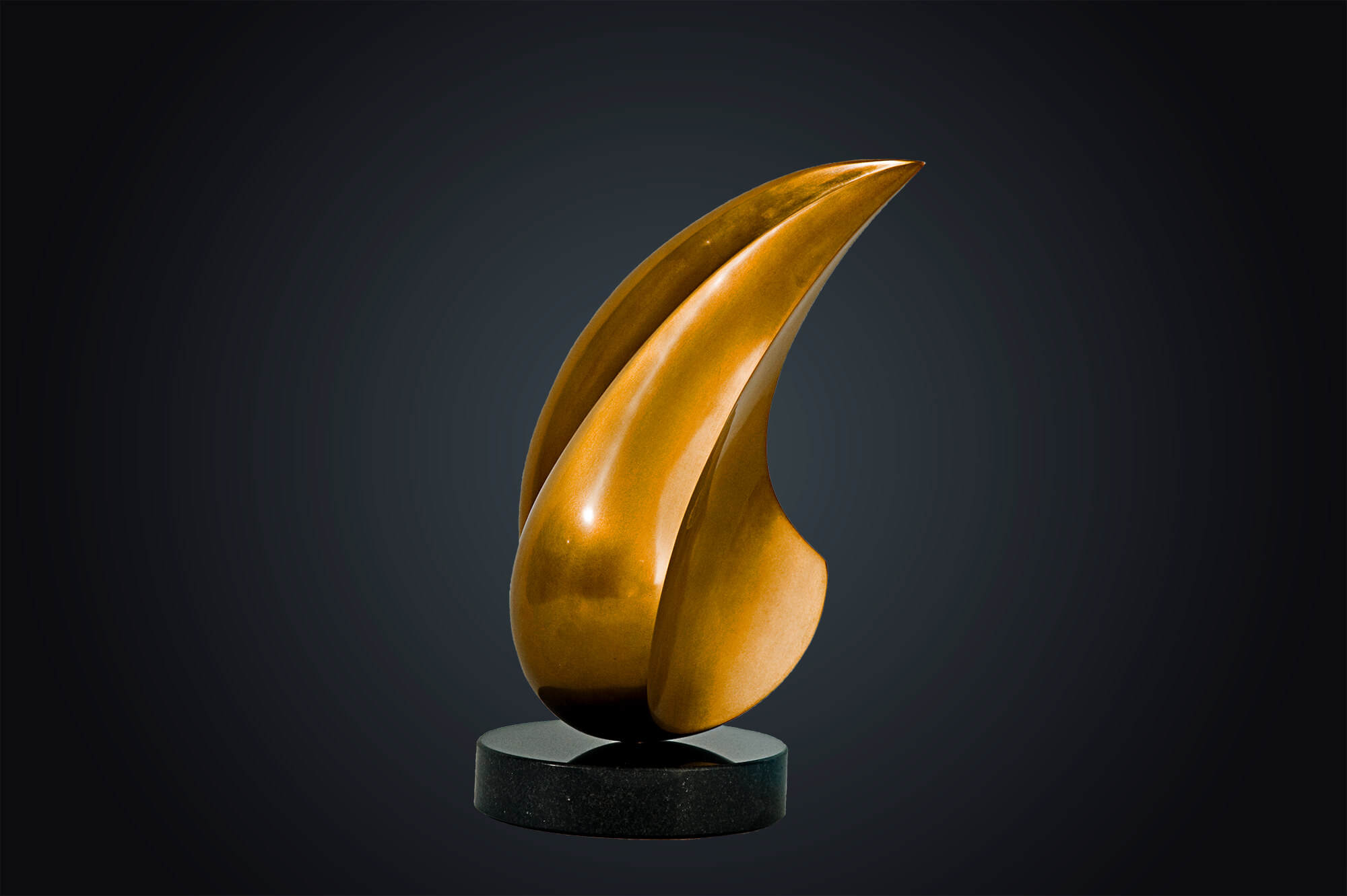 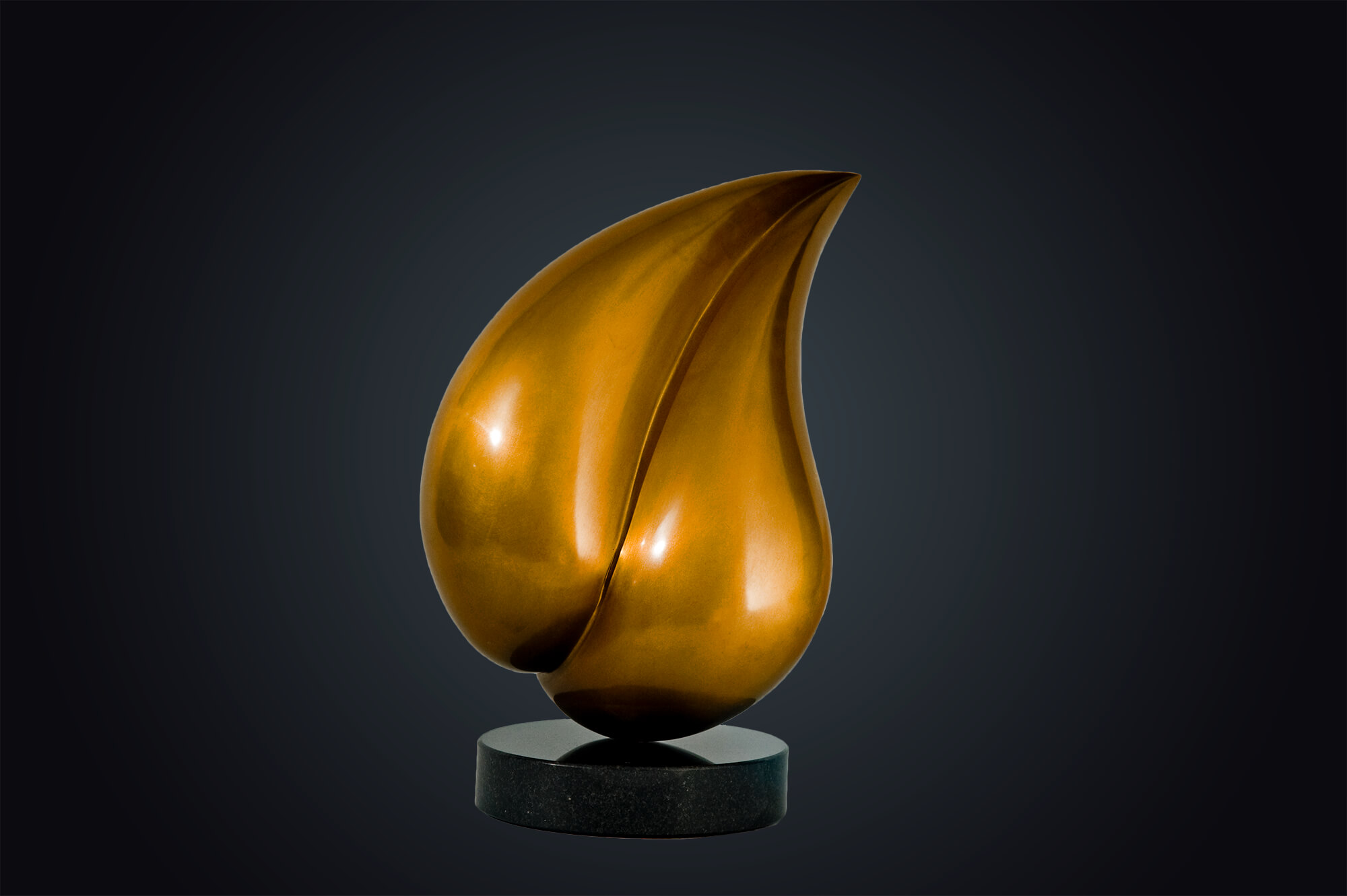 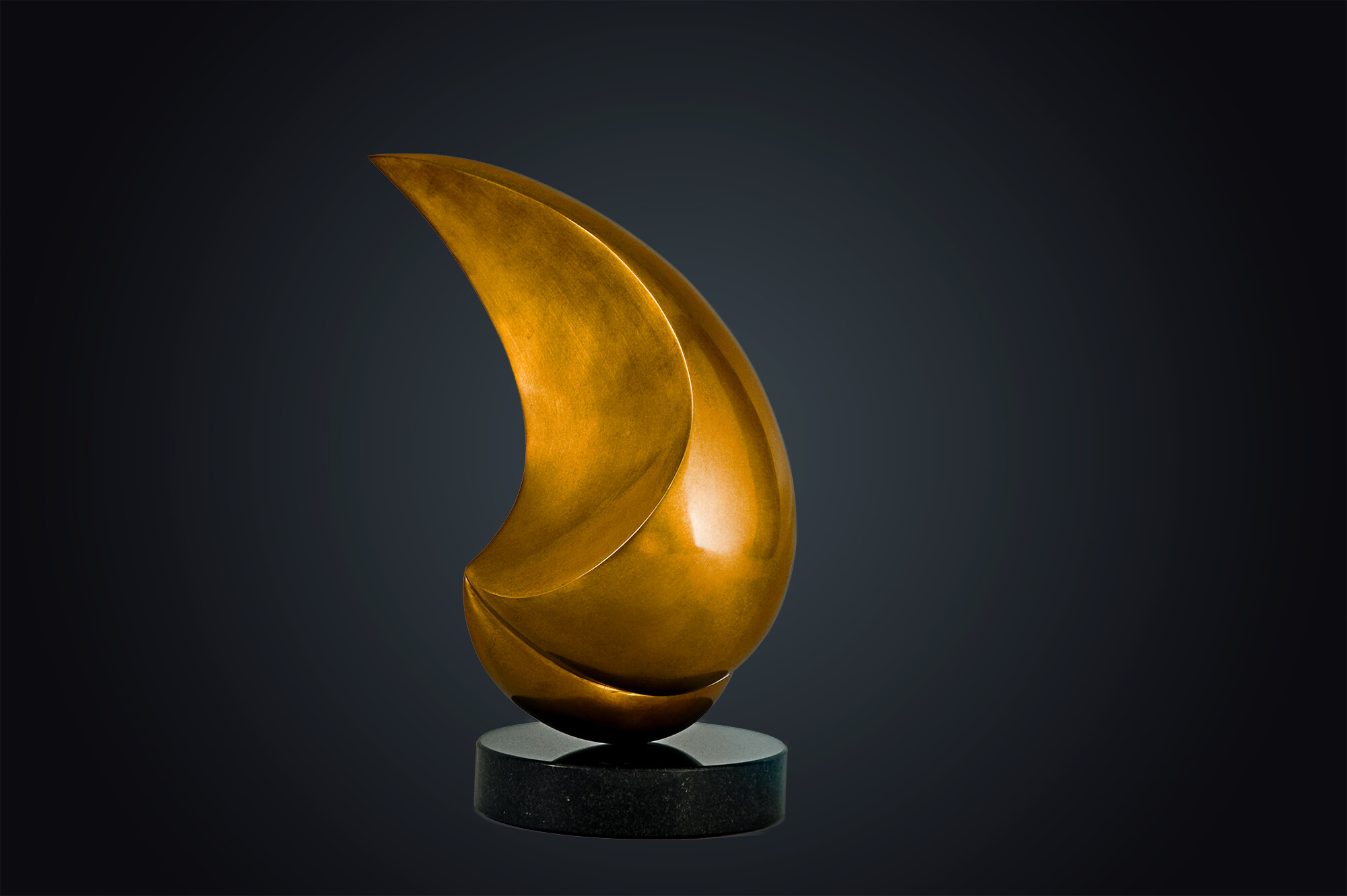 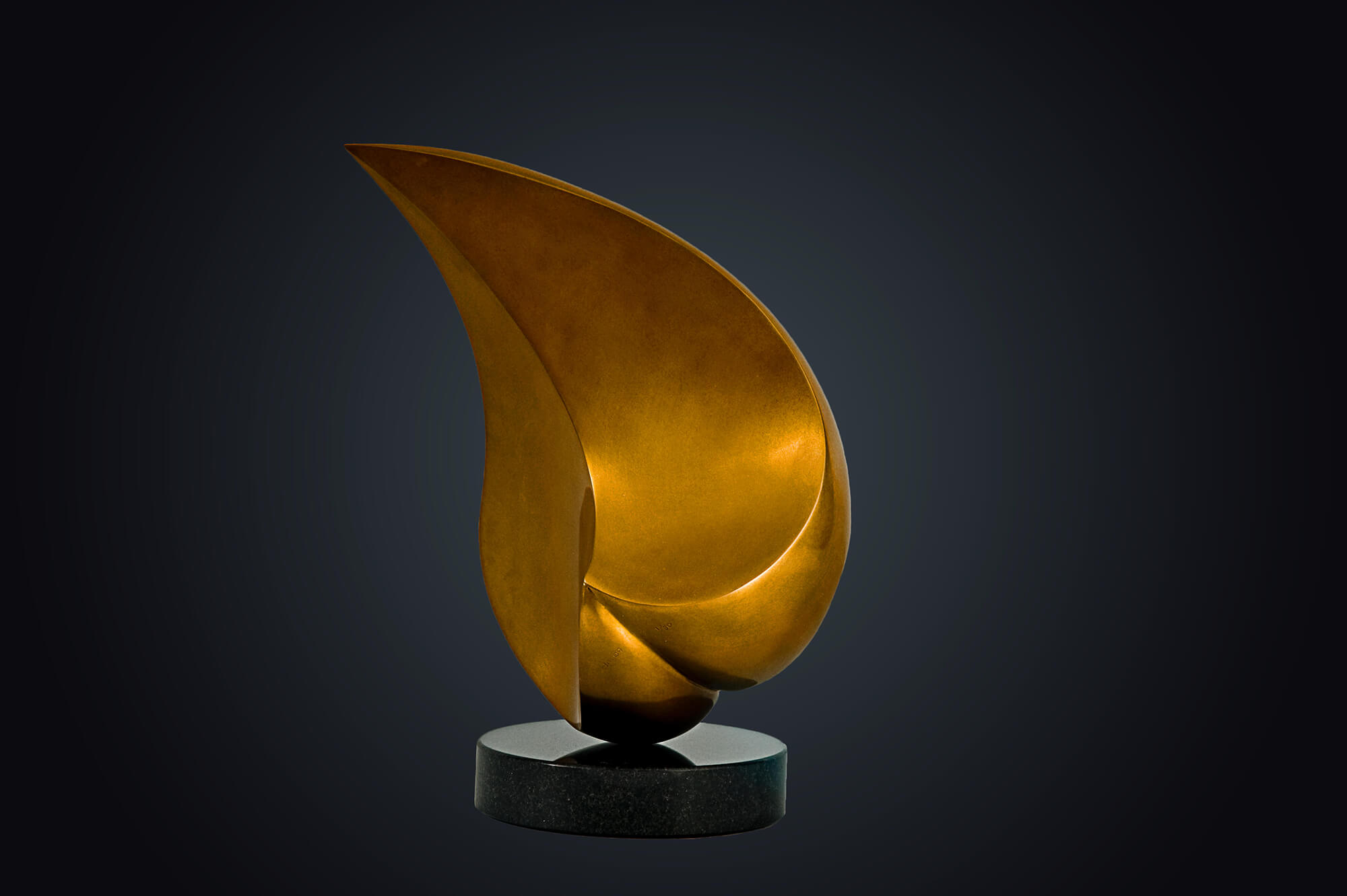 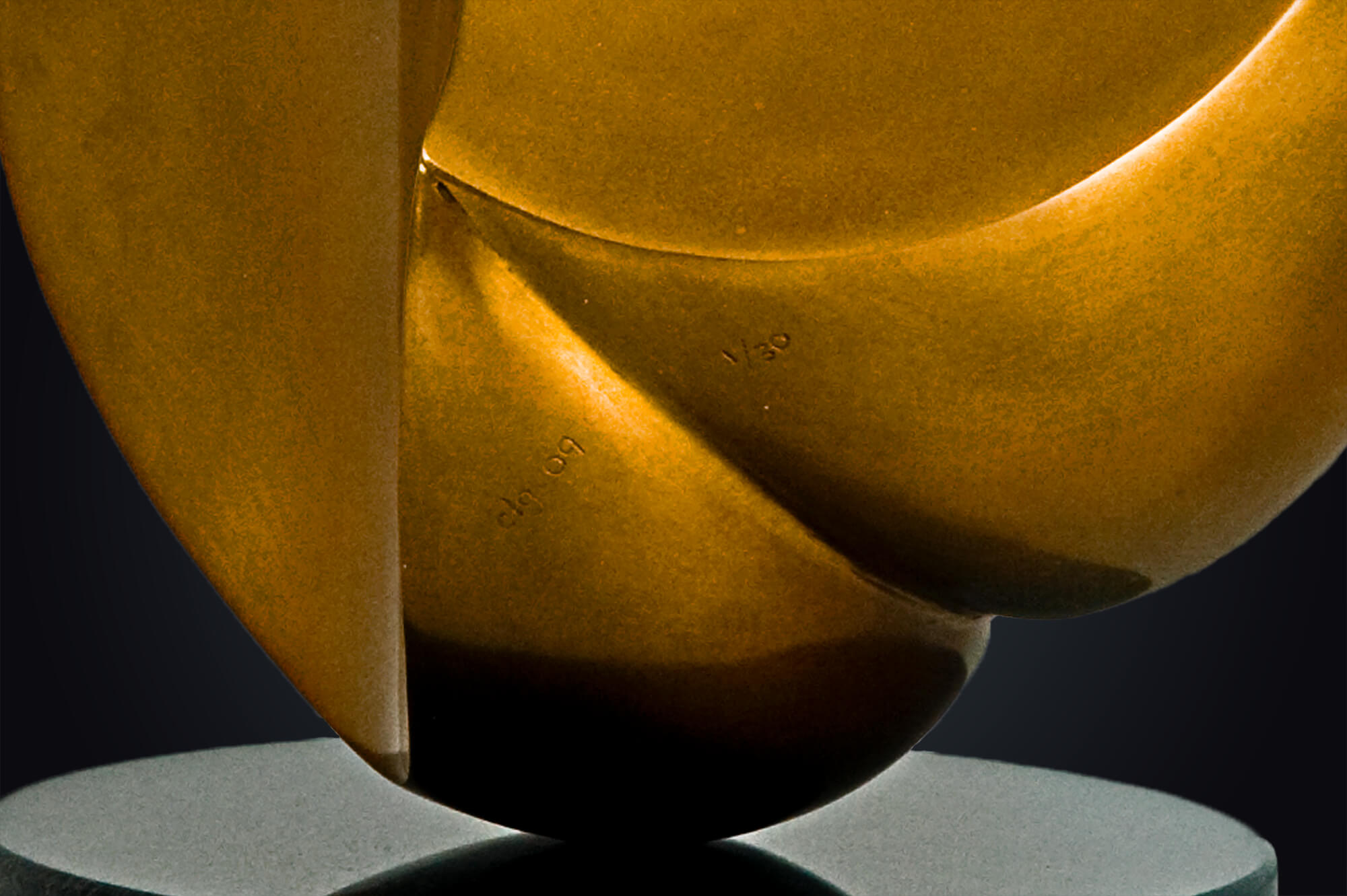 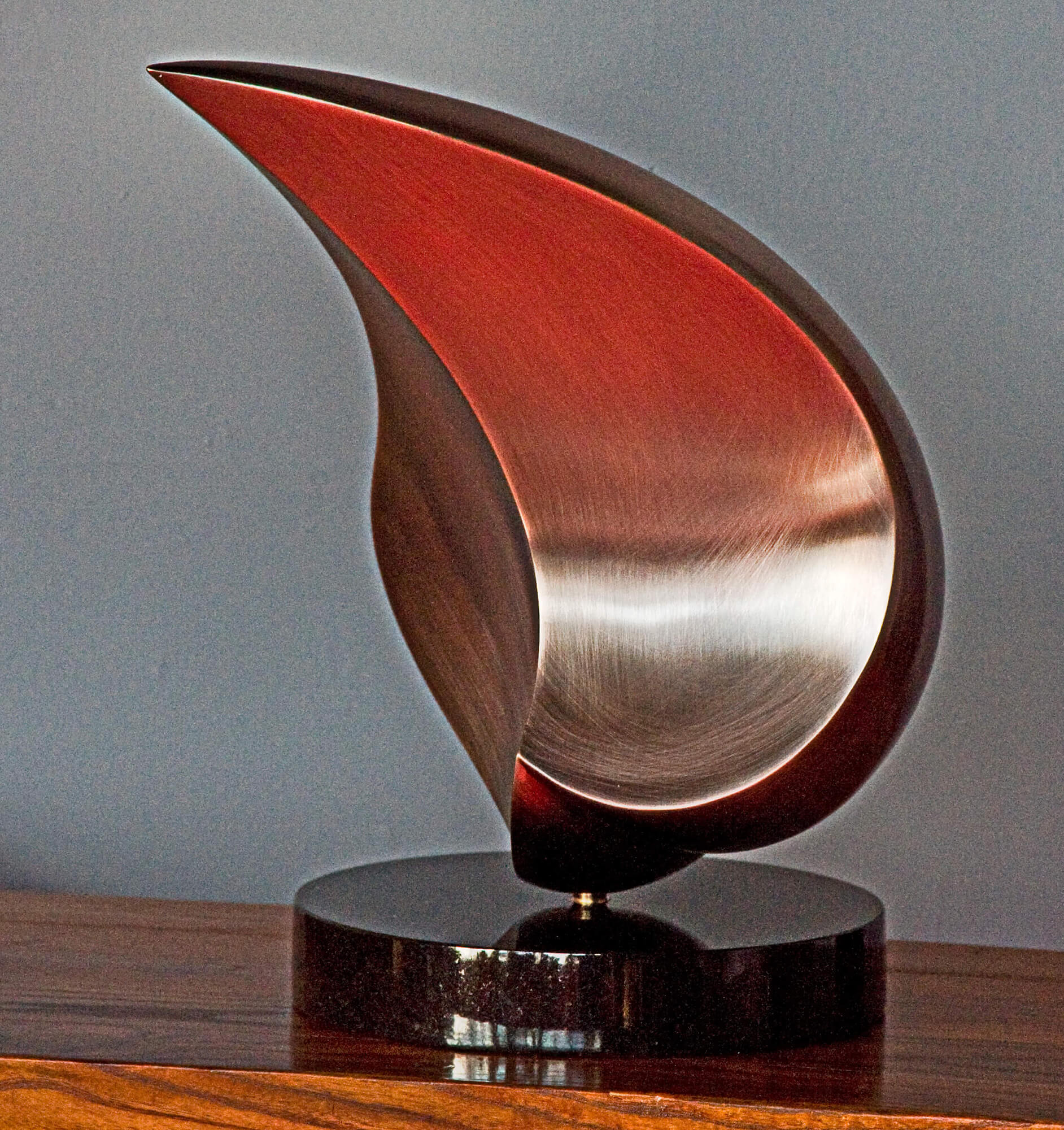 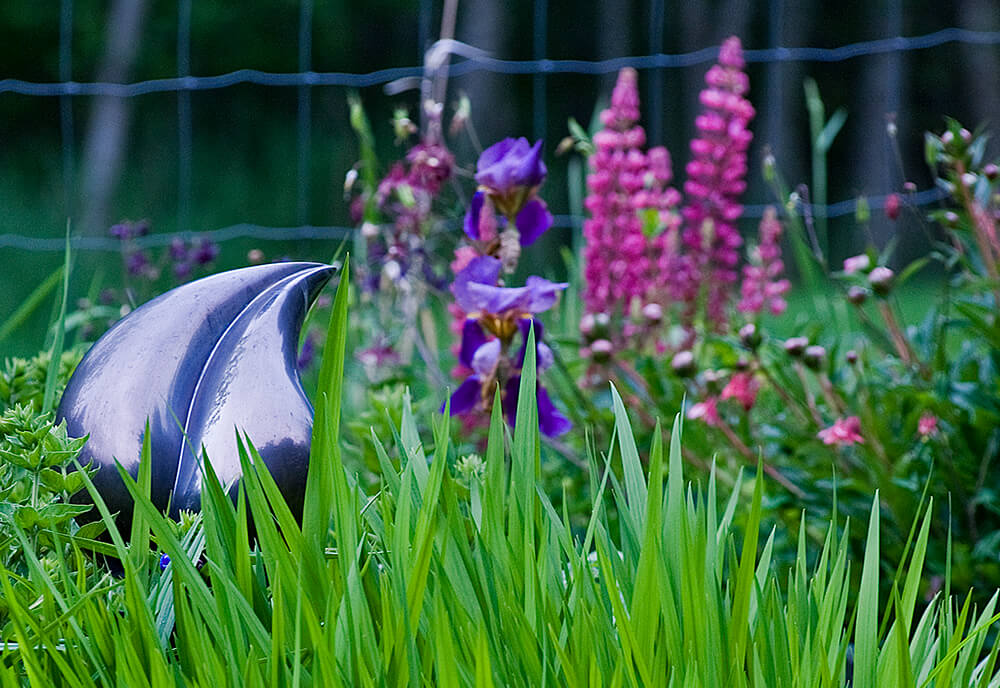 The translucency of the stone imposed two simple constraints and Eternal Flame’s form satisfies both. Twin convex upper surfaces collect light from all directions and send it through the stone. Twin concave lower surfaces, shadowed by the stone, glow with the light transmitted from above. The raw stone already suggested a kind of movement, or potential movement, that I call thrust, and I developed that suggestion as I went along.

Creating Eternal Flame was an exercise in geometry for me. Two similar volumes, side by side, mirroring each other. Two concave and two convex surfaces, also mirroring. Four edges. Two points. My challenge was to work with those simple elements to create a form that displayed the qualities of the stone to greatest advantage and provided thrust.

My wife Lu named Eternal Flame based on its appearance and what it evoked in her as she viewed it, touched it, and lived with it.  It invited her into a space of spirituality and sanctuary, and conjured thoughts of infinity and eternity.   Later, at its first public exhibition, my friend and fellow scientist and educator Mark Winston told us that it reminded him of the eternal flame, or Ner Tamid, that burns above the ark in Jewish synogogues. He published an article about the sculpture and his experience of it in the Jewish Independent newspaper.

Bronze versions of Eternal Flame are available at any scale, with indoor or outdoor patinas.