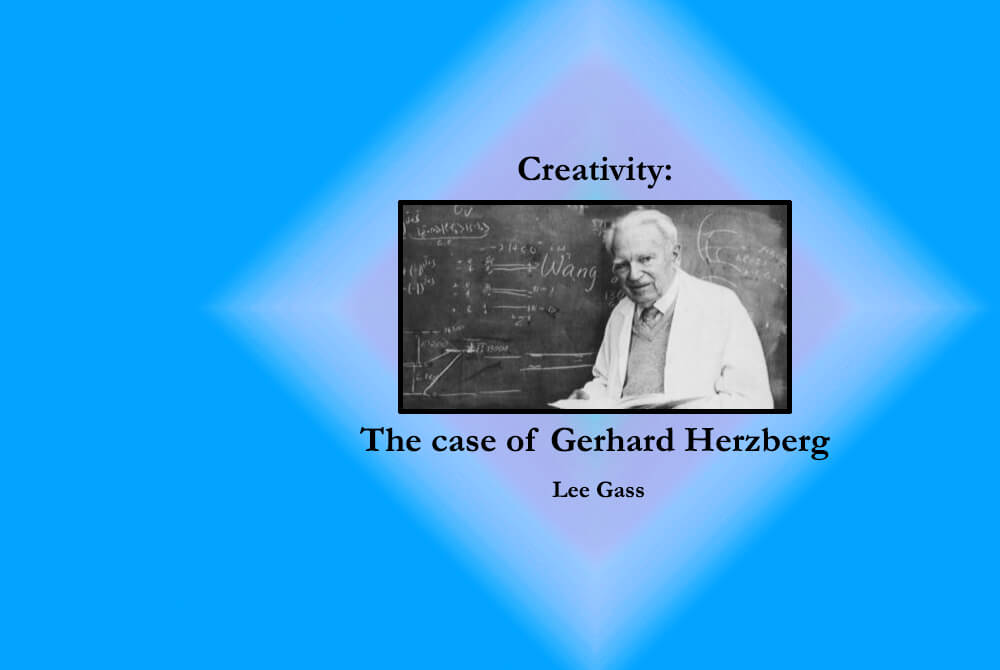 The only way to make new ideas happen,
I think, the only method of creation,
is to go into our studios and
make stuff, as I argued in
Methods of Creation?

Just do it,
but with an open mind
to possibilities.  If so, and that
seems pretty likely to me, then there
can be no other way to be creative
than the hard way.   Get busy
and get as smart as you
can get while you’re
at it.

One day, listening to the CBC
radio program Morningside in heavy
Vancouver traffic, host Peter Gzowski asked
Canadian Nobel laureate chemist Gerhard Herzberg
a question.  When heard his answer I nearly
wrecked my car getting off the road
to write down what he said
before I forgot it.

I don’t remember
Gzowski’s question, but here’s
what I remember of Herzberg’s answer:
“If you think you know what you’re doing,
you’re not doing science”. That is so, so true! Not
just for Herzberg, studying free radicals electrochemically
in the lab, but for creative activity of any sort, I think.  It has
certainly been true for me in art, science, and teaching and
learning! Every day in the lab is a new day, he implied,
just as it is in living.  Not just human beings, either,
but sentient beings of any kind, anywhere and
every time.

Like
the proverbial river
that keeps on flowing, life
never presents exactly the same
situation twice.  Out near the edges
of experience, where we’re ignorant and
don’t know what we’re doing is where discoveries
occur.  Europeans didn’t know what they’d found when
they found the Western Hemisphere. Coming the other
direction, Asians found it long before that and they
didn’t know where they were going either.  Out
on the edge, we must keep our wits about
us just to survive, let alone thrive and
be creative in arts or sciences.
That’s just how it is and
there’s just no way
out of it.

We
sentient
beings must
keep making up
how we live our lives,
day after day after day,
with no free lunch or recipe
for creativity.  At least not that I
can tell, and I’ve been looking for that
particular free lunch forever.  If it really
is true that life is like a river, new situations
offer new challenges, new opportunities to discover,
hundreds, hundreds, and hundreds of times every day.

It is
especially
relevant to creativity
that new situations mean
new confrontations with ignorance,
and we ignore that fact at our peril.  He
made it clear that behind each big discovery
we hear about on the news are hundreds or more
of small discoveries,  most about how to do things
never done before and may never be done again. His
message mirrored my experience of working as
a scientist in my own laboratory and in the
field.  Living with and embracing
their own ignorance is the norm
for all working scientists.

In a talk
I gave about science
education, I said scientists
are like moths to the flame of
ignorance. We can’t help ourselves.
We can’t stay away from it.  We’re drawn
to what we don’t know and many are consumed
by it.  If we understand something or know how to do it,
we immerse ourselves in our ignorance and wonder
about the next thing we’re ignorant about.  It
keeps us alert and creative.  Instead of
doing what we already know how
to do, we strongly tend to
try to do what we’ve
never done.

We
get good at
doing things, you
might say, is to do what
we don’t know how to do.  Some
of this is simple practice, and a lot of
it, a lot of the time, is inventing.
Making up new ways of doing
things is a lot of what we
mean by creativity,
and everyone
does that.
No?

It’s not that scientists leap into
whole unknown universes every day.  No
scientist could and neither could artists.  I see
no way out of this in art, since every ‘original’
sculpture is necessarily new, there are many
media, methods to work with, and so many
forms, and if I tried to make a sculpture
a second time, my body, my eyes, and
my mind would necessarily be older
and challenges would be new.
Herzberg’s reflections on
his own life as a scientist
resonate on broader
cultural levels
as well.

These
ideas underlie the
entire history of scientific
discovery, human inquisitiveness,
and creativity in general. They
also resonate with memories of
growing up in my family,
learning how to live
and to be free.

And that’s just part
of what I love
about the
CBC.

With respect to
my suggestion about making
stuff, a friend gave me a hat saying
Go Into Your Studio and Make Stuff.  Just
as the Slave t-shirt Glenn Sutherland wore in
the hummingbird lab reminded him of the difference
between doing things and thinking about why he
did them, my hat reminded me that if I just
went in there and made stuff, some
thing would come out of it.

Similarly,
as I said about carving
small chalk sculptures in class,
not only did doing it help me keep
my mouth shut when I needed to listen
to my students, but it served as a symbol,
a signal, trigger, ritual, and an important
component of what I came to know as how
I lived my life in sculpting.  Similarly,
a banner high on my studio wall
constantly reminds me to
Behave as if sculpting
were my life’s
work.

Even if
I’m not looking at
the banner, my commitment
is looking at me

Reading what I
wrote about scientists
not knowing what we’re doing
reminds me of some stories.

I already mentioned
Glenn Sutherland’s Slave T-shirt in
Repetition, precision, and Chaos.  An example
with an important twist is Saw Filer Guy, about a world
class expert who pretended to never make mistakes
but was very very good at detecting and
correcting them before anyone
else could notice.

Work on the Ugliest Part
explores the same basic idea in
sculpting, science, and teaching.
There are many other examples in
Teaching & Learning and my
Videos & Podcasts
are full of them.