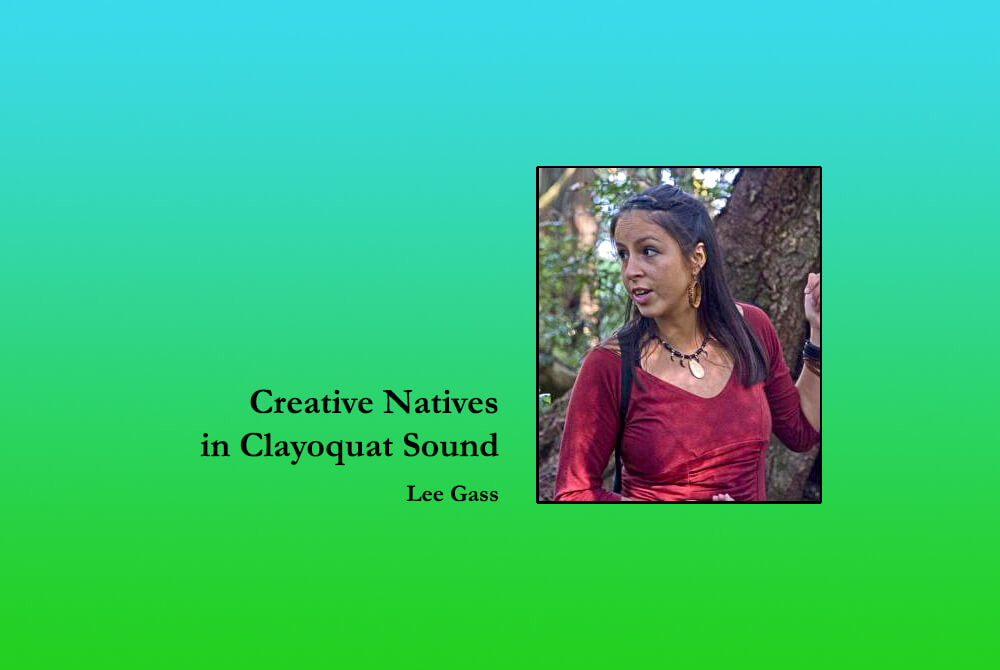 Creativity
is an individual thing,
and it also runs in families and
can run in communities and cultures.
During a 2-day meeting in Tofino last fall
I learned about several creative initiatives
that relate to that, and I want to tell you
about one of them here.  The meeting
itself was a gathering of
three groups.

The
Resilience Alliance is an
international research consortium of
biologists, social scientists, anthropologists, econo-
mists and others who study how complex systems of
all kinds survive shocks and persist despite buffeting.  Lakes,
forests, swamps, oceans, and other natural systems, sectors
of economies, educational systems, political systems,
communities, and whole cultures.  The
range is enormous.

For the Alliance, the
Tofino meeting was a chance to learn
about something several had been studying
around the world:  the resilience of aboriginal
communities in the face of  development and
resource use.  They had read about those
communities and wanted to experience
them for themselves.

I was there as a guest of
the Resilience Alliance.

Ecotrust Canada,
a nonprofit company, promotes
and finances conservation-based economic
development along this coast, the so-called green
economy, and supports community-based and private
enterprise-based initiatives, including many in the Tofino
area.  Native-owned forestry and fishery companies, the
Nu-chah-nulth Central Regional First Nations in Clayoquot
Sound, a local airline. Representing Ecotrust at the meeting
were its President and several principals from head
office in Vancouver and the entire Tofino office.

Several representatives of
the Nu-chah-nulth First Nation were
the third group.  Elder Levi Martin welcomed
us into Tla-o-qui-aht traditional territory, offered
prayers for each session, and told interesting, highly
relevant stories about Nu-chah-nulth history and ecology.
A day-long workshop featured Eli Enns and the management
team of Tla-o-qui-aht Tribal Parks initiative, which links
federal Pacific Rim National Park land, provincial
crown land beyond the Park, Tla-o-qui-aht land,
and land owned and managed by private
forest companies into one large
block, most of the Kennedy
Lake watershed, which
is enormous.

Joe Martin
talked about running a whale
watching business, carving canoes, and
serving as ambassador for his people in France,
England, Germany, and other countries, and after
a sumptuous traditional lunch on the second day
with fresh salmon, we went on a nature walk
at Tofino Botanical Gardens, a top class
garden, guided by Gisele Martin.
The story I want to tell you
here is about Gisele.

In the
summer of her 13th
year, Gisele Martin’s father
Joe, meeting with us then, took her
in a boat to a small islet in the Sound. They
stayed overnight together then Joe left, promising to
return the next day.  After surviving her first night
alone in nature, Gisele decided to stay another
night, and another, and another, and before
it was over she had spent the entire
summer there, alone except for
frequent visits from
her father.

For her,
it was an incredible, life-
changing, life-determining experience.
When Gisele and Joe told separate versions of the
story, it was one of  the  most wonderful things I
had ever heard.  I  remembered my own early
experience of nature, later studying nature,
taking 3-hour solitary retreats with
students in the forest.

Childhood
experiences of nature and
solitude were absolutely pivotal in
my life, and I got the sense on the
nature walk that something
similar was true for
Gisele as well.

Unfortunately,
few people in our society
have spent as much as 3 hours alone
in nature, let alone entire summers.  Nor do
we know much about nature, about living in nature,
or about people in Clayoquot Sound before Europeans
first visited this coast.  There are many reasons to think that
as individuals, families, and societies, we need this contact with
the ecosystems that support us.  We all need it, whether we
admit it or not, live in small towns, the big city or the bush.
Young or old, few of us really ‘get’ what we lose when
communities, ecosystems, and species, disappear
around us, cities sink, fisheries vanish, or
forests burn, partly because we
don’t experience ourselves
as part of it.

Gisele Martin’s
ecotourism company Tlaook
Cultural Adventures can do a lot to
connect or reconnect you to nature, and
spending a day with Gisele will certainly
connect you to the Tla-o-qui-aht, to Gisele’s
elders and ancestors and to traditions
that kept them strong and healthy
there in Clayoquot Sound.

As educator and
biologist, I was impressed
by the quality of the tour Gisele led,
especially given the depth and breadth
of questioning by our group. She stayed right
there with us, in the moment, responded eagerly
and well to barrages of questions about all kinds of
things and her prepared remarks wove rich, accurate
threads of information into tapestries of engaging
stories about where she lives.  She knows the
natural history of the area, and as much
about traditional land use as anyone
I’ve known. Her personal style
is engaging and I highly
recommend her.

At Tla-ook
Cultural Adventures,  parties
paddle Clayoquot Sound in dugout canoes
carved by Joe Martin and his brothers, stopping
to investigate intertidal areas, inlets, islands,
rainforests, rivers, and culturally important
sites and lunching on traditional food.
All along the way, Gisele provides
the sound track. I think
the sound track
is superb.

Here is a video of Gisele conducting a tour.
– I can no longer find Tla-ook on the web –