Nobody but
a fool would wish for a forest
fire if he lived in a forest of fuel.  There
was a wildfire near here yesterday.  Because
of the fire, I got to do something I’ve wanting to do
instead of type, which was to carve.  Muscles, motions,
emotions and sensibilities and a different sense of time.  I’ve
missed them, typing, in my body and in my mind.  Motions,
forces, feelings and forms – – I’ve missed dancing the curva-
tures into being. I’ve also been itching write about current
experience.  Because of the fire I got to do both of them.
Here’s how it happened. I greeted Molly the Airedale
at 7:00, and wondered why the coffee machine
took so long to warm up.  Then I looked in
the fridge to confirm my suspicion
that the power must be out.

When I called
Hydro to report the outage,
she interrupted at ‘Quadra’  to say
high wind had toppled a tree on the line
and started a wildfire.  A crew was on the
way and that’s all she knew by then,
not even know where the fire was,
and that told me two things.

Forest fires love wind,
especially when it’s hot, so this fire
could grow fast.  And the power line runs
along our only road ‘out’, so we were stranded.
A few minutes later, neighbour Dalyce called to
say essentially what I’d just heard, and we remin-
ded each other to head for the salt if things got
bad and wait for a boat to pick us up.  Then
Jerry called with the fire’s location.  It
was farther than we’d feared and
would have to come up-
wind to get here.

Obviously, the power
would be out for hours or days,
so I could either fire up the generator and
keep writing or do something else.  I did some-
thing else. After fixing tools and putting things
in their places for a while, I split and stacked
firewood for an hour, scissored Molly’s
hair til she tired of it, and it was
still  morning when my
first wish came
true.

I returned to
a big Cedar Flower sculpture
and the dancing was divine!  On one way,
it was what sculpting has always been about for
me: consciously carving away wood or stone in
developing curvature.  On another level, almost
in another dimension, I engaged so fully in
the dance that I lost myself in the work
and my experience of doing it was
primal and profound – – ‘in
the meat’, as I like
to say.

As
I feel my
body feeling the
form, I feel the form
forming my body and it
is part of me. Scratching hard,
scratching easy, scratching slightly
or lightly or hardly even scratching.
Scratching away wood, sandpaper
in hand, and the dust blows
away in the wind.

The result of
this activity depends on
many things, including where, how,
how hard, and how often I stroke the wood.
Curvature evolves as my body moves over the
form and my motions evolve with the curvature.
While the wildfire raged and the power was out
and I couldn’t do anything about either of those
things, a sculpture and I formed each other
and I got to Listen to the Wind all day.
Hour after hour as we danced like
that, cedar, sandpaper and I.
Hour after hour as the
dust blew away,
the Cedar got
smaller.

In midafternoon,
Dalyce called back to say they
were in the mopping-up stage on the
fire, so I turned on a light to tell me when
the power was back on and returned to sanding
the Cedar.  The light came back on after a while, so
I turned it off again, then an hour or two later when I
needed it, I turned it back on again and worked til dark.
Getting to carve without slighting other work would not
have been possible without the fire, and my first wish
came true because of it.  My second wish was getting
to write this story. I realized while carving yester-
day that the fire might be good to write about,
so when Molly and I came to work this
morning that’s exactly what we
did. I hope you like it.

28 August 2016
There was a fire a hundred
yards from here this morning.  A little-
used outhouse caught fire during the night
and neighbours began arriving by 8 AM when
the outhouse had already collapsed into its hole,
the fire had spread meters into the forest, and
flames were climbing the trunks of nearby
trees.  We brought tools and piss-cans
(backpack jerrycan water pumps).
One low-pressure garden hose
and several piss-cans
were already at
work.

Fortunately,
Brent had almost enough
firehose to reach from his place and
Dalyce and Len brought another, his pump
started on the 3rd pull, and there was enough
water in his well to do it. The fire was out and
mostly cool in 45 minutes, it started to rain and
we relaxed.  We learned later that the cause was
a careless smoker: cigarettes down outhouses
are not a good thing.  They are full of richly
combustible organic material (that’s why
we dig them), it was dry, had good
drainage, was surrounded by
dry fluffy duff and over-
hung with conifer
branches.

But like I said
in the beginning, nobody
but a fool would wish for a wildfire
where there is no fire protection beyond
what a few scattered neighbours can
provide.  We were a few minutes
from disaster. 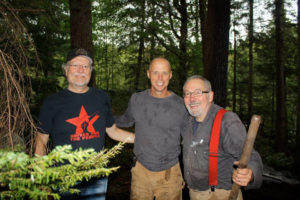 Here I am with my
friends and much taller neighbours
Don Davis and Paul Doherty after the fire was
out and everything we could find was cool to
the touch. Photo by Lillith Cleasby.