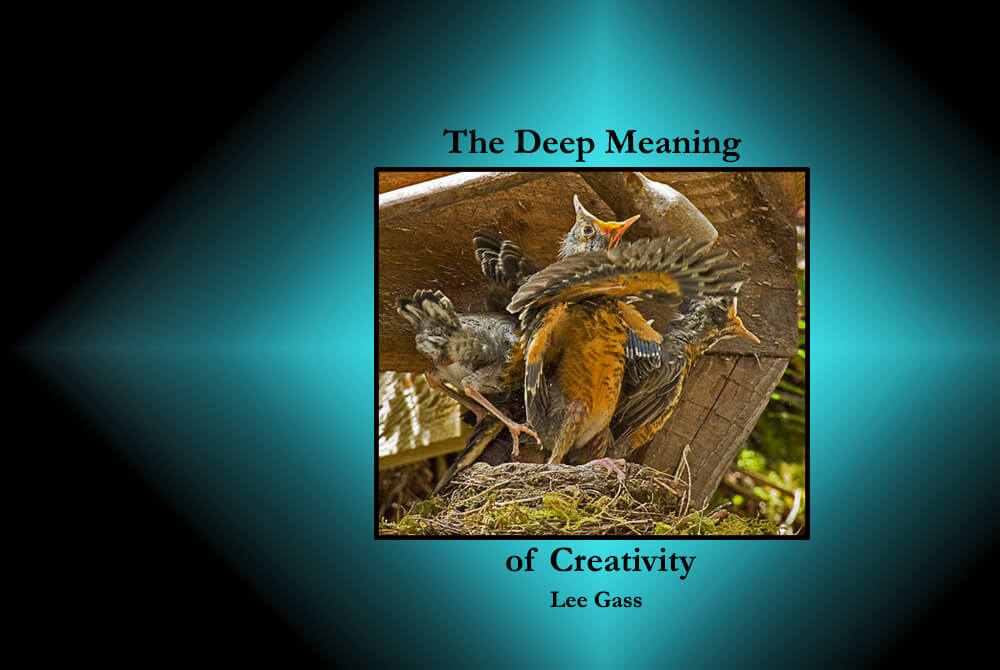 Some
number of nestling,
almost fledgling robins.
The exact number is below.

This year,
for the first time since
my studio was complete, robins
nested inside my outside carving studio,
under a transparent awning. They nested
in similar places on the other side of the
studio before, but never in my work
space.  Juncos had nested there,
hidden by moss in a crevice
in a cliff, but that’s that
story. This story is
about robins.

The robin
nest rested on a wide
fir beam, under cover, warm,
sunny, and unusually safe from predat-
ors.  Less than fourteen feet from my main
outdoor carving station, four babies began as
eggs, grew and developed rapidly, then fledged,
all in a few weeks.  The fledglings have flown the
coop and that part of it is over now.  The barred
owl and ravens may or may not have eaten the
babies and the survivors may or may not be
managing, with their parents’ help for a
while, to survive.  I set up a ladder,
kept my camera mounted
and took pictures.

While the
parents chose the nest
site and built the nest, I was away
a lot and when I was home I was usually
in my office or the garden.  Mostly the garden,
actually, where I built a grape arbor and a curved,
contour-hugging stone retaining wall with rocks
accumulating for millenia. For the most part,
my outside carving studio, which was their
birthing chamber, was quiet and rarely
did I disrupt their calm.  I’ll bet they
thought they’d died and gone to
heaven when they found
that place.

But all Hell
broke loose when I got
back to carving, because I came
back with a vengeance. I’d had enough
of the city, of hauling rocks to the garden
and building walls with them, of screening
soil, hauling that to the garden and enough
of my office. I’d had enough of anything that
wasn’t carving and wanted to move stone.
Literally overnight, their quiet, well
appointed refuge became an
INDUSTRIAL ZONE
and they were
stuck with it.

Many times a day
I came suddenly into view,
striding around the southwest corner
of the building or opening the giant swinging
door from the interior toward them. At intervals
determined by the amount of compressed air I was
using at the time, a big compressor came on, close
under the nest in a shed, loud and sudden enough
to startle me at times. Sometimes my boulder
rang like a bell with the pounding, several
times a second, of a pneumatic hammer,
all through the carving.  Every
thing I did to the boulder
changed its tone.

Other times
I cut into the rock with a
screaming, diamond-studded steel
disk, spraying cold dirty water everywhere
or kicking up unholy clouds of dust and screaming
even louder. I grunted and strained horsing the stone
into new positions like a boulder-throwing Scotsman
warming up. A bright light illuminated every
thing I did and I was on display, the centre
of attention, and from the robins’
perspective, I’m sure,
a bother.

From the
cheap seats of the robin’s
nest, it must been a sight and sound.
It was a different kind of place, and the
parents clearly didn’t appreciate it when I
carved, at least at the start. In a word, I freaked
them out.  I wasn’t about to stop on their account,
either.  They would just have to put up with me.
If they couldn’t hack it in my studio they’d
have to lose that clutch and try again
somewhere else, but if they could
they’d be welcome to share
my space with me.

Beyond being
as polite as possible without
slowing the work, I wasn’t about to
change what I did or how I did it just for
them. It was my studio and they could either live
with that or suffer the consequences.  As a biologist,
I knew that if they did put up with me they’d have
an enormous advantage over predators, most
of whom would be too afraid of me to come
anywhere near.  I don’t think the robins
saw it that way at first. That’s
the back story.

The story
is that I got to see all
of it, at least in snippets, through
egg-laying, incubation, provisioning with
the fruits of the forest, changing babies’ diapers,
and otherwise keeping an eye on things, all the
way to fledging. It was a successful reproductive
attempt Both parents worked their butts off bringing
home the bacon and from what I could tell from the
photos, they brought mainly moths, worms,
caterpillars, beetle grubs, and three
kinds of berries, none of them
from our garden.

When I took
this picture, nestlings were
rapidly outgrowing their nest, they
were little more than a day from fledging,
flight feathers still growing in, bellies still pink
and tender, still couldn’t have made it on their own.
Increasingly active, they took exploratory forays along
the beam supporting the nest, sudden lurches over their
sibs to the other side of the nest, furious bouts of wing
beating, sometimes two chicks at a time, both hanging
on tightly, all four chicks as clumsy as anything
and the bigger they got and the more they
moved around, the smaller their
nest got in comparison.

There was a lot going on in there!
It was a riot!

Until a few days
earlier, all they had to do
was sleep, open their mouths when
parents came to feed them, and when they
could manage it, turn their bottoms to the sky, let
parents pull fecal sacs directly from their vents and
grow and develop into robins. But by the time I took
that picture, their job was to get ready to leave the nest
but they didn’t know how.  Here is an example. Fledg-
lings need to fly, but they need strong muscles to do it.
Nestlings, while still only nestlings, must exercise
their flying muscles to grow them into fledgling
muscles, wings beating furiously, holding
on to nest and sibs for dear life.

They had
to learn to see in
deep 3D, too, beyond the tips
of their noses, and notice and track
motion there to prepare to find
food without themselves
becoming food for
predators.

They prepared themselves
to leave the nest without leaving the nest, so to speak,
and all of it was new to them.

Flight feathers
still growing in, bellies tender,
pink, and bare,  they didn’t know what
in the world they were doing.  They’d never
been in the world before. They were babies, after
all, and the main things they thought about at first
were sleeping and food. They were so eager to be fed
that any little thing flipped them in an instant to a
new state, from dead-out asleep into full-on,
mouth open, mind-closed begging
mode, even doing some
thing else, like
practice
flying.

It was hilarious.
It was like looking
in the mirror.

At the 11th
hour, only a day away
from fledging, they couldn’t co-
ordinate the parts of their own bodies
and were hopeless at coordinating with sibs
or anything beyond. As I told you before,
they were clumsy.  At that exact
moment, I took this picture.

I still can’t be
sure what was happening
at the time.  Which chick did what,
which body parts belonged to which chick, or
what happened before and after. Four nestlings are
visible, at least three of them performing vigorous,
even violent behaviour, all undoubtedly good
exercise and good practice but, though
necessary, at least somewhat
risky, to say the least.

Some of the action is puzzling.

A wing
curves across the
foreground like a flamenco
dancer’s cape. Whose
wing is it?

At first glance,
it seems to belong to the
open-mouthed nestling at the
right.  But to be that bird’s wing it
would have to be a right wing and
that bird’s right wing is folded along
its body.The beating wing belongs to
the nestling in the middle, mouth open
to the sky. But which wing is it, right
or left?  If you study that wing
carefully and think about
what is happening
you can tell.

The nestling
with its bum to the left.
What is it standing on? Its left
foot rests partly on a wide wooden
beam slanting upward at 45 degrees
and partly on what might be the tip of the
left wing of the bird at the right. Except for
one claw, its right foot is either clawing at
nothing or has that claw planted in the
back of the baby with its mouth
pointing to the stars.

Check out the fingernails!

The theme of learning by doing runs
throughout my stories about
teaching and learning
and creativity, like
Methods of Creation?