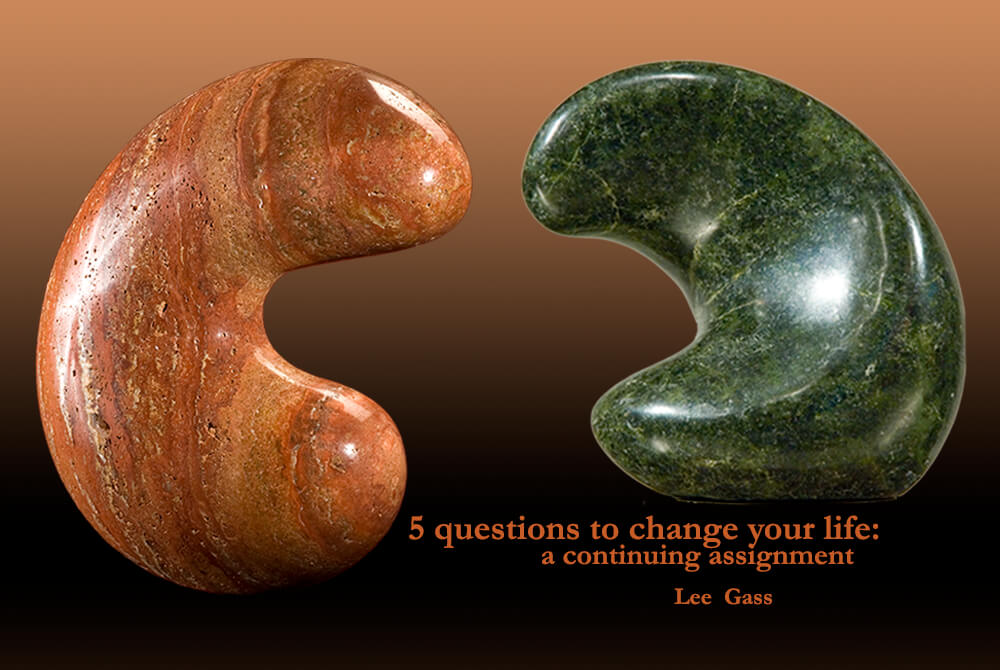 This assignment is
completely optional. It is the most
powerfully effective way I have discovered
to empower intellectual growth but worthless
if taken lightly.  It is an interactive dialogue
between us that invites you to examine,
communicate, and transform how
you operate at successively
deeper and more
significant
levels.

Submit
responses to the following
5 questions under a title page that
includes at least your name and the date.
Each time you submit the assignment attach all
previous submissions with the most recent on top.
Begin each response on a separate page. Clearly
indicate which questions responses address.
Type single-spaced with wide margins,
single sided.  Use all of your
writing skills.

Depth and
quality are much more
important than quantity, but it would be
difficult to express anything of value in less
than a solid paragraph.  Your responses
can be as long as they need to be
and you can submit them as
often as you want.

Use this exercise as
a way to deepen your appreciation
of yourself as a learner, to express that in
writing, and to get feedback from us about it.
We will read and comment on what you write, so
leave plenty of room for comments (wide margins
and single side). If our comments trigger responses
that can’t wait, that’s great.  Don’t wait.  Do it
again while the impulse is hot.  Put every-
thing you have into this assignment.  It
can dramatically and permanently
transform what education is
for you forever.

One
What are the best
things about this course so far,
in terms of your intellectual development
and growth of your awareness of human
ecology?  What are the most important
ways in which this course has
facilitated your growth
in these areas?

Two
What are the worst
things about this course so far in
terms of your intellectual development
and growth of your awareness of human
ecology? What are the most important
ways in which this course has failed
to facilitate your growth
in these areas?

Three
What have been your
most important contributions
so far in this course to your intellectual
development and growth of your
awareness of human ecology?

Four
Discuss the most
important factors that currently
block your intellectual development and
growth of your awareness of human ecology.
What keeps you from achieving even more
than you already have in them?

Five
What mark do you
intend to receive in this course?
What is your responsibility to see
that you receive this mark?
What is ours?

I developed
this assignment in 1969
when I was a PhD student in ecology
at Oregon. Carlos Galindo and I perfected it
in a course for non-scientists on Human Ecology.
I’ve used it in several kinds of courses since, always
successfully for those who tried it, sometimes dramatically.
The depth and power of students’ responses astounded me
and the development they exhibited through the experi-
ence impressed me.  Those things underline the idea
that the deepest, most important learning is
metacognitive and reflective, and is
personally transformative.

One student produced
about 160 pages of typing in all,
with voluminous written comments by
Galindo and me each time.  This was only a
small part of the work she did in the course,
but \she claimed it was the core.  Carlos
and I both learned to write, almost
literally, from that student.

As I hinted above, engaging
in this exercise is a powerful stimulus for
intellectual growth, or the ability to know and
understand things.  That is one of its benefits and
that benefit is transferable to many other situations,
in many other places and times. Getting better at
knowing and understanding one kind of thing
helps later to learn other kinds of things,
especially if they are similar
in some way.

Another benefit
flows from the fact that the
exercise is about what all courses are
about: learning the ‘stuff’ of some discipline,
learning to learn it, and hopefully learning to
love at least some part of it.  In this case and all
others, ‘stuff’ includes not only what we know,
but how we know it, how we come to know
it, think about it and speak about it, how
we know we know it, what we will or
won’t believe about it and so on,
almost ad infinitum.

‘Stuff’ does include
all that.  But even if all the assign-
ment did was ‘force’ students to express them-
selves as active learners, it would help them learn
the material.  Much more important than any of that
is that it helps them see that they, themselves, are
responsible for what, how, how much, and how
well they learn, how long they remember it,
and what they learn about how they
learn while they’re learning it.

Those first
students were science
outsiders whose academic homes
were in Arts, Humanities, or Elsewhere
and had put off their science until the last
possible instant and couldn’t graduate without
taking some science and ended up in my course.
Some students knew they knew everything worth
knowing about Human Ecology coming in and
some thought they knew nothing.  Both
were wrong.  Virtually no students
had even a clue about science as
a way of learning things.

Without saying
so directly, the exercise helped
those who “knew” that they knew nothing,
or suspected it as a habit, to see that they were
wrong about that, that they learn scientific material,
and think, speak, and write scientifically.  Those
who thought they knew everything, usually
young males, learned similar
lessons from it.

It helped all of them realize
that many of the capabilities they
had been building in their home disciplines
would help them in science, that they were
transferable skills and that what they were
learning in Human Ecology was helping
them everywhere else.  It helped them
integrate their knowledge and
understanding.

Through years of engaging in this process
with students, Galindo, I, and others later,
noticed some interesting patterns.

For a surprising
number of students, the best and
worst aspects were the same.  It was more
surprising  that few of them realized until later that they
had been bragging and complaining about the
same things!  It was hilarious, actually,
especially since both arguments
were so strong.

It was
fascinating to see how
individuals’ responses evolved over
time, particularly in relation to what was
happening with the second pair of questions at
the same time, about personal contributions and
blockages to growth.  Here are my two favourite
examples of that pattern. This pair of com-
plaints also appeared often in student
evaluations of my other courses.

Some students
seemed not to understand
at first what it means to “intend”
to receive a certain mark in a course, or to
intend to do anything, really.  They wrote as
if they thought their own volition as active
learners had no bearing on what they
learned.  But, not yet seeing them-
selves that way, how could they
think otherwise?

Good grades take
hard work.  That’s a no-brainer
and everybody knows it.  But hard work
and smart work are not the same.  The exercise
helped them discover the difference, particularly in
response to comments we made on their writing.
In an important sense it made them smarter
and helped them direct their learning
more effectively.

Some students
conflated intentions with hopes,
as the following pair of responses to Questions
3 and 4  illustrates. Again, individuals often didn’t
seem aware at first of a causal connection between
their own behaviour and the consequences of that
behaviour. Some were annoyed that we would
ask them to comment on how we would judge
them, as if that were all our affair
and none their own.

When students
expressed pairs of statements
like these as complete sentences, after
they realized they’d paired them, they usually
used ‘but’ to conjoin them.  That in itself
was revealing and opened
insights.

Usually in that kind of case, it would be more
accurate, more open, and more direct to say

Noticing
patterns like that
helped us respond more deeply
and effectively and to coach students
in their effort to make good on what
emerged in the exercise as real
possibilities that they could
make come true.

One of
the more interesting
patterns that emerged was that
for some students the best aspects of the
course and their biggest blockages to growth
were the same.  That made no sense to us at
first glance, especially without the
specifics that fleshed it out.

But
consider a student
who already knows a lot
about Human Ecology coming in
and is proud of (usually his) ability to
demonstrate that knowledge but the course
cramps his style.  He’s used to demonstrating
knowledge and understanding, not interacting with
others to create it or acknowledging, embracing, and
bragging about his own ignorance.  That one issue
could easily be his greatest opportunity,
challenge,  sense of accomplishment
AND blockage, all at the same
time.  It happened.

An
important
outcome of these
exchanges was that
although many students
were quite aware of significant
contributions they’d made to their own
growth and considered that aspect of the course
the best, they still felt blocked, and they were blocked,
by their own poor attitudes about their ability.
This, like most of the other cases, is a classic
example of cognitive dissonance.

One of our most
important tasks in commenting on
these kinds of responses, and on others, was to
help students see pairs of statements like these
as dissonant: How could both be true?

When we used the Continuing
Assignment in any course, my assistant
and I both read and commented on all responses
by all students to all questions, sometimes at length, and
returned them promptly.  We often commented on each other’s
comments as well.  It helped handle the load that there was no
‘due date’, so we tended to receive submissions one or a few
at a time and could get them right back.  Perhaps most
surprisingly of all, nearly all students in some courses
participated fully in this time-consuming
exercise that carried no credit
or brownie points.

Our intention was not
to teach students anything about
themselves in commenting, but to help
them discover it for themselves.  In particular,
we tried to help them identify, acknowledge, and
resolve paradoxes like “How can my best and worst
things be the same?”  Since most students didn’t see the
relationships among questions at first and we didn’t
tell them, we needed to help them to see, feel, and
take advantage of that depth to improve
their learning process and keep
tuning it forever.

The image
accompanying this story
illustrates an important feature
of the assignment, which is both iterative
and recursive.  It is repetitive in that students
responded to the same questions repeatedly, and
self-referential in that the process itself  evolved with
repetition.  The image features my Recursion sculptures
in serpentine and travertine. Carving them helped me
explore self-referential, iterative processes in learning.
Using those two sculptures to illustrate, I wrote
about those concepts at length in The Notion
of Creativity in relation to science,
art, and learning.

When I took an
Evelyn Wood Reading Dynamics
course in 1967, our performance increased
so fast that everyone in the course ran up against
“I am performing at this level but I am unable
to perform at this level,” which blocked our progress.
I started as such a slow reader that I was reading 4 to
6 times faster than I’d ever read when I hit that wall
of disbelief in the third week, but everyone hit it
at about the same time.  Of course the course
was prepared for that.  They proved it
to us AND scrambled our notions
of what reading was all about
with a very simple test.
But that’s another
story.

That $500 course was
one of the best investment I ever
made in my education that.