In my work
as a university professor,
questions about where ideas come
from were central to everything I did in
research and teaching, and now, as a full-time
practicing sculptor they are the very essence of
my work.  Creativity and innovation are so
important in our culture, and every
other, that it is important to
understand them.

Here I will
describe the evolution
of a series of sculptures that began
on a camping trip with my kids on the
Yalakom River in autumn 1983.  It rained
the whole time and everything was muddy,
but we kept a nice fire outside our
tent and had a great time.

Since I was soaked
to the bone anyway, it seemed a
good time to wade in the river and look
for rocks.  The rich green colour and overall
shape of a hunk of  serpentine appealed to me
and I brought it home. During quiet times
on the long drive back I thought about
the rock, held it on my lap,
and visualized its
form.

When we
see faces and elephants
in clouds and stones, psychologists
say we’re ‘projecting’ experiences of
our own inner lives outward and
imagine seeing them there.
I live my life as a
projectionist.

Though the rock
was still just a rock on the way
home and for some time after, it kept
reminding me of the circular-arrow ‘reload’
ikon in computer browsers.  Browsers hadn’t yet
been invented and the internet was still limited to
nerds like me in universities.  But I knew the symbol.
Humberto Maturana uses it to indicate the autopoietic,
self-recreating nature of living systems. Because
of the shape of a rock, that led to recursion, an
important idea in my animal intelligence
research and my work with
students.

Recursion refers
to recurring, self-referential
processes that modify themselves
each time they occur and successive
cycles build on each other, ‘recursively’.
Smooth, automatic body temperature
regulation is a simple example
of a recursive process that
maintains stability.

Some are
unstable, like falling in
love or hate. Everything reinforces
everything else once they begin, and unless
something intervenes to change things, they
accelerate to inevitable conclusions
much different than their
starting points.

The thrill of discovery
is similarly explosive.  In research, teaching,
sculpting, and ice cream making.

Within a
few weeks I had
completed the small green
serpentine Recursion, and for the
next 25 years the idea of recursion grew
ever more central in my work and in my life.  I
fell in love, felt daily growth in our relationship, and
gave Recursion to Lu to recognize that. At work I
kept exploring intelligence in nature and
learning to help students learn
at accelerating rates.

I dreamed
of returning to recursion,
larger and in different stone. Waking
fantasies of carving stone,  visions of sculptures,
dreams in the night. Recursion and families of
related forms tumbled in space, seemingly
forever, while I explored example after
example, in memorable scenarios.

I usually emerged
from those experiences with some
new insight about the real world – – a research
problem, how people learn, individuals learning
difficult material. Nearly always it was
with stronger resolve to create
another recursion
sculpture.

In late summer 2008 a
5-foot column of red Persian travertine
had been standing at the corner of my studio
for years and I’d looked at it every day.  Suddenly
I ‘saw’ myself carving another, bigger Recursion from
a piece of it. I photographed the original from every
side, enlarged the photographs to the scale
of the column, transferred the outlines
to the travertine, and roughed
out the sculpture. 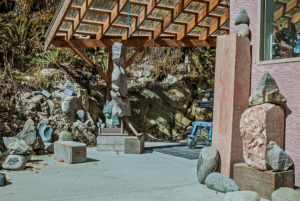 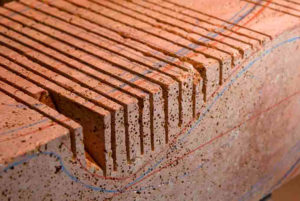 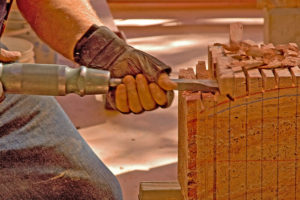 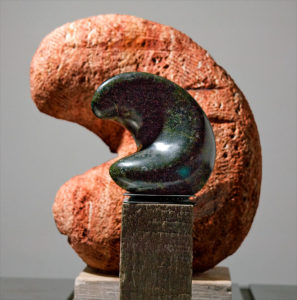 While roughing out I realized that
working at a larger scale offered design
options I hadn’t realized in the smaller, earlier
serpentine sculpture.  Recursion has one smoothly
curving surface covering it but Red Recursion has two:
A protected, everywhere concave inner face that curves
into itself in all directions, like the inside of an eggshell
and a protecting, convex, partially surrounding outer
one. One one surface became two in my imagination
they could evolve, both as separate surfaces and in
relation to each other, and gradually, through
a recursive process of adjustment they
came to complement each other,
inside and out.

While carving
Red Recursion, I was
already imagining developing
the form further in the rest of the
travertine column. When that sculpture
was finished, I made a 3-D computer model
of it, stretched it upward and twisted it
in various ways around its vertical
axis to see how it would look. 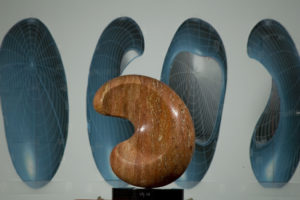 Too
much
elongation
reduced the feeling
of self-reference and recursion
of either of the originals, but it also invited
other qualities to express themselves and moved
the design into a family of forms that characterize my
Anima series and the sense of nurturing that some of them
evoke.  Anima II and Heart of Anima are good examples.
Still in the computer, I made a mirror-image replica
of the stretched, twisted model, then made large
prints of both models and used them to rough
out two new sculptures in travertine.
Both were still in progress when
I first published this. 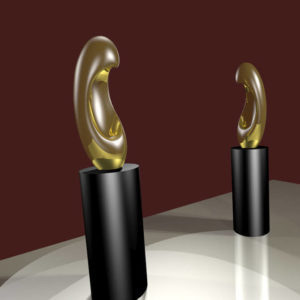 At least that
was the Grand Plan.
After sitting in the garden for
several years, the two stones parted
company, one eventually becoming
Madonna and Child and the
other Reflections. 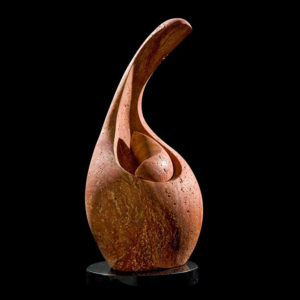 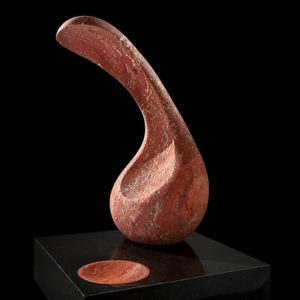 Among other
things, these sculptures
show two ways ideas come to me,
both important in sculpting  and else-
where in my life. Forms remind me of
thoughts and feelings. Thoughts
and feelings remind
me of forms.

Those sources
of ideas are closely linked.
I zoom small forms up to landscape
scale in my mind and imagine traveling
over them, as if riding a motorcycle at high
speed in mountains. Under these imaginary
conditions, I can actually feel forms kines-
thetically, in every part of my body.  I
also zoom real landscapes down to
sculpture scale, and imagine
carving them.

Here is how I expressed
it in my first
business
card.

“My science
and my sculpting are
about forms and patterns of
objects and events. Ultimately they
are about the ‘shape’ of being alive.  Perc-
eption, conception, and expression of pattern
are so deeply fundamental that using them in
any domain promotes their development in all
others.  Moving my hands over objects in all
directions is exactly what I must do to
carve them!  How wonderful
can that be?”

Wonderful
things can occur
when you pick up a
rock and imagine
carving
it!

In Methods of Creation?
I tell the Yalakom River Story
from the perspective of creativity.

During a brief
conversation in Amherst
Massachusetts, I learned of some
amazing research on visualization.  A
PhD student and her supervisor devised a
difficult computer-based task that required
quick response and accuracy with a mouse
or some other pointing device.  It took a
lot of practice to get good at it.  Half
of the subjects practiced daily
and the others on alter-
nate days.

On their
‘days off”, alternate-
day subjects stayed home
and imagined practicing for the
same set time.  “What difference did
it make?”, I couldn’t help interrupting.
Practicing half the time and visualizing
practicing the other half was almost as
good as practicing full time.  They
also told me some professional
sports teams taught players
visualization techniques.

I never
followed through to
see how it developed, and don’t
even remember their names.  But their
story reinforced what I was already doing
in sculpting and encouraged me to increase the
visualization training I was already doing with
students at both graduate and undergraduate
levels.  It also encouraged a more imagin-
ative way of writing scientific papers,
especially in the scary parts like
speculating on meaning and
extending theory.