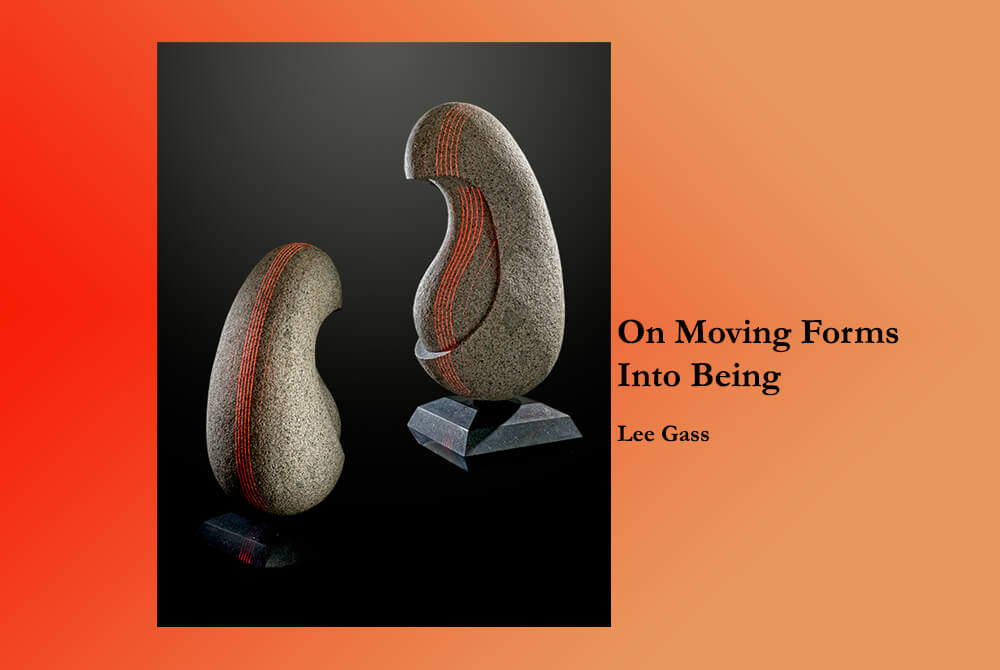 The Granite Madonna.
Sculpture and photos by Lee Gass.

This was the first
of a series of stories about
Experiments, brainchild of chore-
ographer and dancer Gail Lotenberg.  The
performance aimed to express nothing
less than the essence of scientific
discovery, and I think
it succeeded.

My engagement in
the project began as one of a
team of scientific advisors.  More and
more as Experiments developed, Gail and
I discovered deep similarities in how we
thought and spoke about movement
in dancing and sculpting and
explored them.

Out of that
realization came a sculpture
exhibition, a display of sculpture photo-
graphs, and two posters Gail asked me to
design. Graphing in Science and Sculpt-
ing is based on one of those posters,
and this story about move-
ment on the other.

As context for what comes
later, here is a description of the
sculpture exhibition.

In the foyer
outside the dance theatre,
at the end of a long mirror with a barre,
the Madonna rotates slowly. A laser projects
five brilliant red vertical lines on turning white
stone.  Smoothly curving coarse grained surfaces
pick up light. Curved lines move sinuously over
curved forms, forcing you to see them in stark
3D, all of it reflected symmetrically
in the mirror from up and
down the barre.

On Moving
Stones into Sculptures.
It is as true as anything I have ever
known that stone sculptures are records
of the movements of the sculptors who create
them.  Sculpting is a dance. Regardless of
visions, symbols, intentions, or anything
else, this is the way it is when
you carve a stone.

Sculptors dance with
figments of their imagination when
they carve, weeks or months at a time, and at
the end of it is a work of art. To create any par-
ticular sculpture in stone, my body literally
moves its form into being.  I dance with
it, over and over again with tools
in my hands, transforming
it, gradually, into what
it is becoming.

If my body
can’t move a form, I can’t
carve it. It’s as simple as that and
there’s no getting out of it. The challenge,
always, is to move the form. 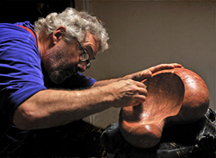 Sometimes my
body won’t move a form, or
won’t sustain a movement, and I must
go into physical training before I can carve
the rock. Sometimes I must heal my emotions
before my body will cooperate with my mind.
Fortunately for me and for the quality of my
work, moving forms into being, literally
creating them with movements of
my body, is therapeutic in
both ways.

My sculptures
and I transform each other
as I make them.  A major miracle of
my life, I think, and something I’m grateful
for, is that I am still developing as a
sculptor at  77 years old.

See Mark Wunsch’s
spectacular video of The Granite Madonna
rotating in a field of laser light.  With reference to
my final comment about my age, it was a fairly big deal
for me 12 years ago when I entitled a sculpture
Holding Firm at 65, which were my age
and condition at the time.
I’m still holding.