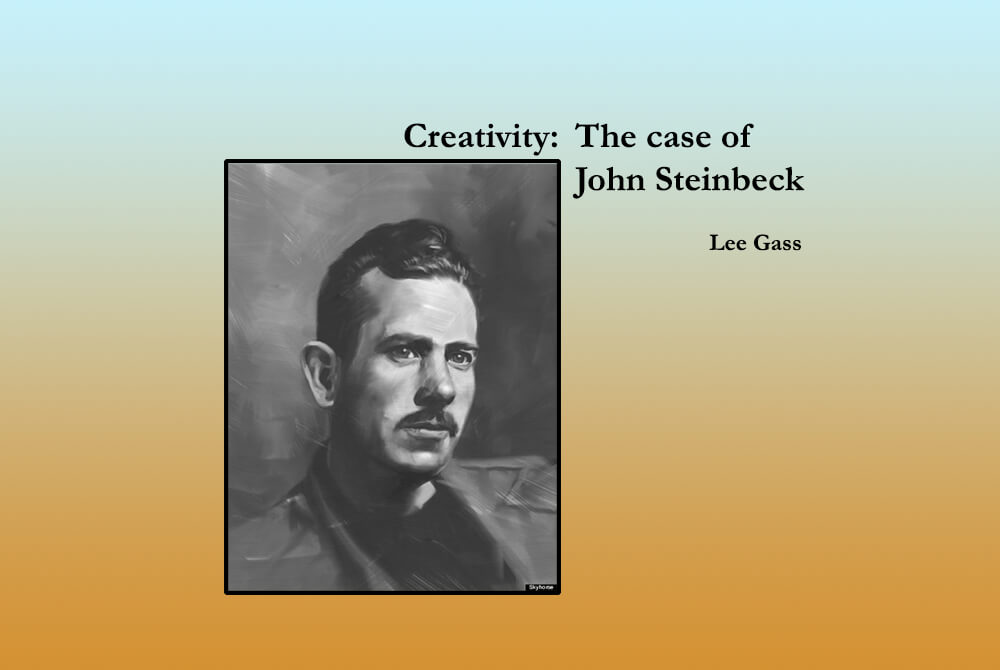 I claim in several
stories that there’s no such
thing as methods of creation in
arts or sciences.  At the same time,
I show how artists and scientists keep
placing themselves in situations
in which new things occur to
them in their work.

Distinguishing
creating and working may
seem trivial and perhaps it is.  But given
broad interest in creativity, scant information
about its sources, and general recognition of
its value in all cultures, that difference
seems critical to me.

Novelist John
Steinbeck offers a fascinating
way of looking at this.  In particular, it hints
that working and creating are separate
processes that occur at the
same time. 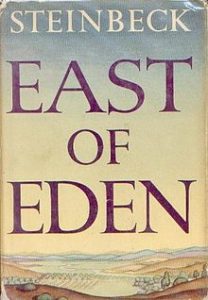 East of Eden,
which won the Nobel Prize
for Literature in 1962, grew out of Steinbeck
wanting his sons to know what it had been like in
California’s Salinas Valley  before they were born.
He followed two imaginary prominent local families
over several generations using Cain and Abel as
a model for the story.  That is all I have found
about his creativity relative to that novel,
which makes it similar in that respect
to Michael Ondaatje’s book
The English Patient.

Fortunately, Steinbeck
kept a minutely detailed record
of his method of working on East of Eden,
thanks to a suggestion by his editor, Pascal Covici.
Steinbeck, who wrote with pencil and paper, wrote
his novel on the right-hand pages of blank books Covici
supplied and recorded his experience of writing
it on the left-hand pages, every day.  The two
books unfolded in tandem during
an 11-month period. 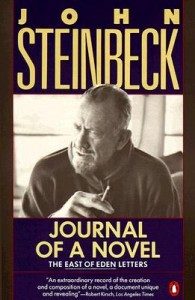 Journal of
a Novel: the East of Eden
Letters, published posthumously,
is fascinating. Here are a few
of the gems I remember.

Steinbeck
wrote daily, whether
he wanted to or not and whether
he thought had anything to say.  He just
wrote.  Starting early in the morning, he wrote
his quota of 6 pages in complete isolation,
generally well before noon, and didn’t
write again until the next day.

His rule was
about pages, not ideas
or significance, and he sat
down and wrote them.

That left
him free most of each
day to do other things, like
sail in the sea with his family.  Though he
was a serious, productive writer,  those “other
things” were just as important and he didn’t let
writing dominate them.  If he didn’t write one day,
which happened sometimes, he doubled his
quota the next.  It kept him on schedule
and he finished both books almost
exactly when he aimed to
finish the novel.

Steinbeck credited
Covici’s idea for helping him
draw his thoughts together,
stay organized, and stay focused.  It
helped him reflect on what he’d written,
decide what to write next, and
tune the writing.

It sharpened his
awareness of his own awareness,
kept the story sharp in his mind as it
unfolded, and tuned him to his body,
to his mind, and to living.

Significantly
for all of us, I suspect, and
it has certainly been true of me when
I’ve kept journals, Steinbeck also credited his
journal for helping him confront and counter
his resistance to the discipline required
to write novels. We all resist discipline,
he suggested, and he claimed we
need strong measures to
counteract it.

Those comments
remind me of a quote from
Harry Emerson Fosdick. “No horse
gets anywhere until he is harnessed, no
steam or gas drives anything until it is con-
fined, no Niagara is ever turned into light
and power until it is tunneled.  No
life ever grows great until it
is focused, dedicated,
disciplined.”

When I
read Fosdick in the
early 1960s, I was a young
man obsessed with freedom and
opportunity.  I absolutely hated the
thought that anything good could ever
come from confinement, constriction,
restriction, constraint, restraint,
or anything of the sort.  That
made it a very good thing
for me to read then.

Most of my students were
similarly obsessed with freedom and similarly in
need of discipline, so it was like looking in the mirror
to work with them and they helped me learn the lesson
of constraint for myself. Thanks to them, I came to
see the

truth of the matter for myself
and new ways of thinking about
creativity opened up.

I claimed
above that Steinbeck’s way
of working sharpened his awareness
of his own awareness, which is an even
deeper aspect of Covici’s suggestion. By asking
Steinbeck to cycle between writing and writing
about writing, he was asking him to cycle
between cognition and metacognition.

Cycling is
iterative, by definition.  Because
it tuned his process and changed him
as a writer, it was also recursive. My Recursion
sculptures explore that idea in three dimensions.
Several of my stories explore recursion in
science, education, and art, and most
of the rest of them imply it:

Architects of their Own Education
Frank Spear and the Pea Seeds
Work on the Ugliest Part
The Notion of Creativity
Methods of Creation?