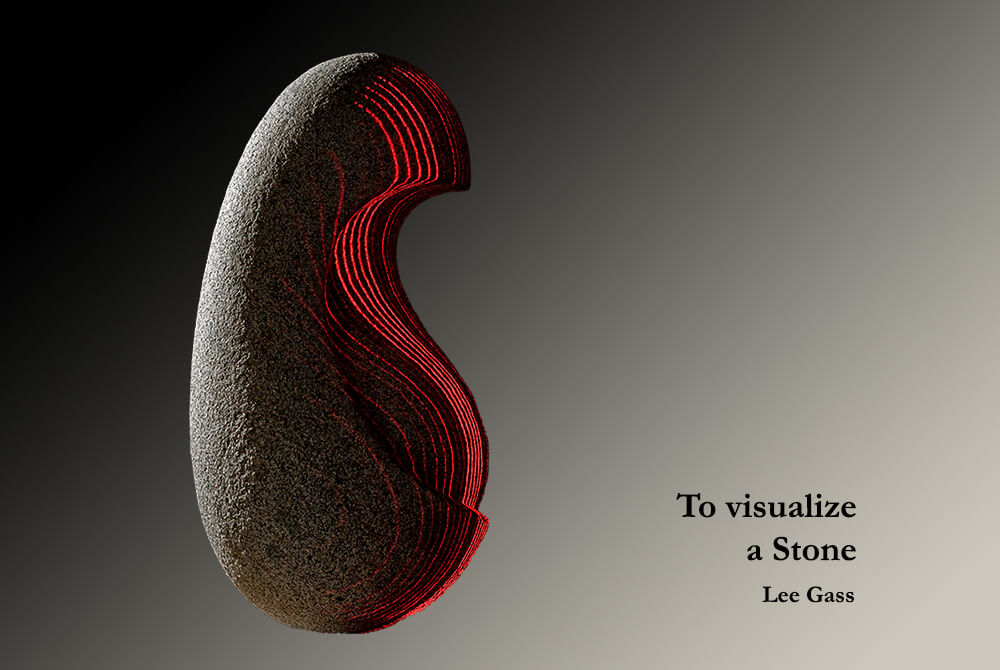 The Granite Madonna, in progress.
Photo by Lee Gass.

Various aids to
visualization help me ‘see’
forms as they develop, see what I’ve
already done, and see what to do next.
They are tools to use when
I need them.

Chiaroscuro.
On the left side of
The Granite Madonna, above,
illuminating her back, is strong directional
white light from a flash.  Leonardo da Vinci didn’t
use flash, but he developed a way of lighting subjects
for painting. Rembrandt and Vermeer perfected it
and made it famous. Chiaroscuro is a perfect
name for it in Italian: clear/obscure,
light/dark. 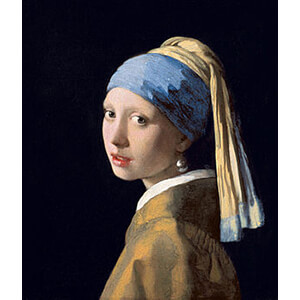 The Girl with the Pearl Earring
by Johannes Vermeer.

Neighbour, artistic
colleague, and friend Perrin Sparks and
I used chiaroscuro lighting in our portraits of
her, her pastel self portrait less extreme
in its chiaroscuro effect than
my photograph. 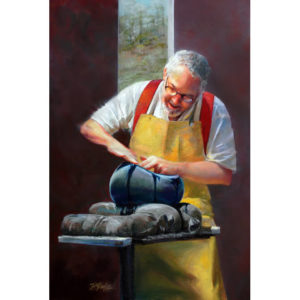 The skylights in my
studio provided chiaroscuro
for Perrin’s pastel painting of me
shaping Heart of Anima with
wet sandpaper. 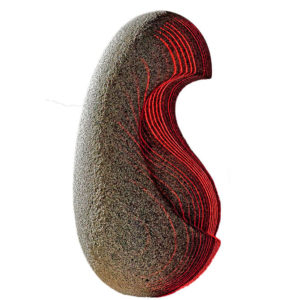 Depending on nothing more
than the angle between the light and the
surface at every point, rough, light-toned surfaces like
the Madonna can be anything from the whitest, brightest
white to the darkest, purest, black.  This makes chiaroscuro
not just a way to display finished sculptures but a way to study
and direct their evolution of form, especially along the horizon
between day and night where light fairly glances across high
points, leaving islands of brightness on the bright side and
shadows of darkness on the other, and in that zone,
chiaroscuro reveals surface texture as well as
curvature.  We might well imagine the
craters of the moon.

The resulting
topographic map reveals both
broad patterns of curvature and fine
patterns of texture in
perception.

Movement reveals
these dramatic effects more drama-
tically in several ways. Lasers scanning over
surfaces reveal some kinds of  things, sculptures
rotating in laser light reveal others, and a third kind
of movement, what sculptures are made for, is
available only by moving freely around
sculptures and touching them to
experience them in a
variety of ways

Angles, distances,
directions, juxtapositions,
speeds of movement – – sculpture
in the round.  What does this image
tell me about the developing form
and what I have to do to
make it sing?

It tells me a lot.

Horizons.
Follow the left horizon from
the forehead at the upper right, all
the way over the head, the back, and around
the bottom to the step inward at the lower right.
If I see that horizon as a single curve and ignore every-
thing else, the bottom back part of  the curve seems flat to
me.  The top and bottom curves, each beautiful on its own,
fight with each other there there in a way, and my eye,
my perceptual system, and my senses of continuity,
wholeness, and integrity would rather not ‘see’
that horizon as flat, but as a single, beautiful
curve complementing the curve
in the front.

My imagination
can see it that way if I pretend
hard enough, but my eyes refuse.  It’s easier
and more useful in the end to see it as it is:
two curves with possibility, a flat spot
between, and an ugliness to correct
while I deal with many
others.

Other horizons
and other placements of light
reveal other problems and invite me to
correct them until the whole ‘outer’ surface
appears as one thing, one object, one surface.
Meanwhile, something similar occurs
with the two other surfaces, which
helps me unite them into one
single Madonna.

What a lot
to learn from a curve!
And nothing yet to do with
lasers, or even, really,
chiaroscuro.

Follow the
twilight zone from top to
bottom, where light turns to dark and
craters would be stark if Madonnas could be
moons.  From ahead of the crown of the head
where it disappears, follow that zone down
through shoulders to hips toward
the bottom.

Three quarters
of the way down, something
happens in the twilight zone. Above,
it is well behaved and offers nothing surprising
for eyes to grab onto.  All parts ‘predict’ all others.
Through most of the twilight zone, curvature changes
continuously, unsurprisingly, and I see it, feel it,
and experience it as a single crescent feature
that falls apart below into a motley
collection of parts rather than
a twilight zone.

That incongruity
is another symptom of the “pointy
bottom problem” described above.  Removing
stone from the near hip will allow the
twilight zone to continue
downward.

As you
can see in the video of the
completed Madonna rotating in
that light, sculptures have an infinite
number of twilight zones, all
of them informative.

Follow the curve
of the step inward in the front
horizon from the brow to below the belly,
back along the sharp edge, down and around
to the step outward.  To my eye, that curvature
seems flat in the middle.  That flat part in front mirrors
the one in back, making both of them appear worse than
they are.  I need to push that part of the ribbon back to
integrate it with curvature above and below it, and
integrate that curve with the left and right
horizons.  Developing this relationships
is a key to completing the
sculpture.

Those flatnesses,
together, stand out like a
single sore thumb.

To my eye,
the right inner horizon is
good from the top to a bit below the
throat.  But the belly  bulges out too much.
Here’s what I think I need to do about it.  After
rounding the outside bottom, I will re-evaluate
the front profile before adjusting it, then push
the belly in a bit.  Paradoxically, that will
make it seem bigger and bulkier,
perceptually, for its loss
of volume.

The curvatures
of the five central laser lines
reveal much about the three separate surfaces
that compose the sculpture and their relationships:
a large rough outer body surface, a smaller rough inner
body surface, and, stepped in from the outer body to the inner,
a thin ribbon of granite delineating them sharply.  The pattern
of curvature of those lines reinforces my urge  to push the
bottom upward into one broad curve, from her belly
to the small of her back, head, and brow.

This analysis reveals
several problems to be corrected.  It
also highlights the lovely sigmoid curvature
of the inner body: belly to throat to brow.  My
challenge is to coordinate the curvatures of the
inner and outer bodies with each other
and with the ribbon of granite
that separates them.

Together with
normal lighting on the back
of the head, the laser lines also reveal
that the three surfaces of the head are well
integrated already and I don’t see much wrong
with them.  But the faint lines beside the five show
that the near side of the belly is not integrated
well with the rest of it.  The image is just a
snapshot. How much more could we
learn from a video of the piece
rotating in this light?

As I explained
in Help!, I have not yet drilled
the piece for mounting, so must balance
it somehow to take its picture.  I can’t drill
before knowing the vertical axis and can’t know
that before adjusting surfaces and volumes, as I’ve
described here. Rounding the bottom will subtly shift
where the balanced sculpture kisses its base and the
mounting pin must enter precisely there, vertically,
for the sculpture to rotate on an invisible pin
without wobbling.  Each adjustment changes
center of gravity, changes balance,
and changes the vertical, so I
must drill late in the game.

I don’t think
of the detecting and correc-
ting I’ve described here as methods of
creation. They are more methods of production
or engineering.  But aids to visualization are
constant for me in sculpting. The quality
of  the sculptures I create depends
critically on them.

Chiaroscuro in daily life.
Lu snuck up on me
last fall while I wet-sanded Waveform
2019 and took this picture.  One source lights
the work for the worker and dim afternoon daylight
fills shadows for the camera, the viewer, and
for me, a sculptor sculpting a sculpture,
which changes continuously
as I work. 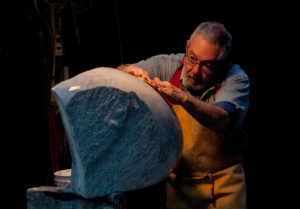 When this
story appeared in the Vancouver
Observer, I still called The Granite Madonna
by its working title, Three Surfaces.  All during the
creation of the piece, that title reminded me of the
challenge of expressing all that the finished
sculpture expresses, and evoking every-
thing it evokes, with the shapes of
just three surfaces.

At that stage
in the evolution of the sculpture,
I could and did describe the madonna
feeling I wanted to create, but wasn’t
yet willing to risk a ‘real’ title.

That came
at the very end.

In a beautiful scene
in the film Camille Claudel,
her fellow sculptor, new employer,
and very soon-to-be lover Auguste Rodin
uses heavy drapes and high windows to arrange
strong chiaroscuro lighting over Claudel’s body.
It may be the only subtitled film I’ve ever
become totally absorbed in, despite
the language barrier. 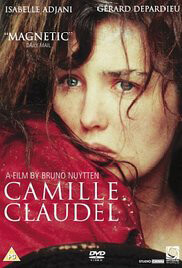 Mark Wunsch’s
stunningly beautiful video of
the completed Granite Madonna rotating
in both kinds of light at the same time takes
visualization of the shapes of stones to another
level.  Without my saying anything at all about
it in the sound track, the combination of
motion, music, superb videography
and creative editing embody
the value of these tools
to me.

For demonstrations
of lasers scanning sculptures
and other examples of sculptures rotating
in laser light, see three short videos of
In Love and Soaring.

I expand at length on
the value of detecting and correcting
ugliness in Work On The Ugliest Part.
Saw Filer Guy is all about that
issue and its punch line is
powerful.

Made To Be Touched
explores the value of touching
sculptures in the broad context
of gallery exhibitions.

First published in the Vancouver Observer