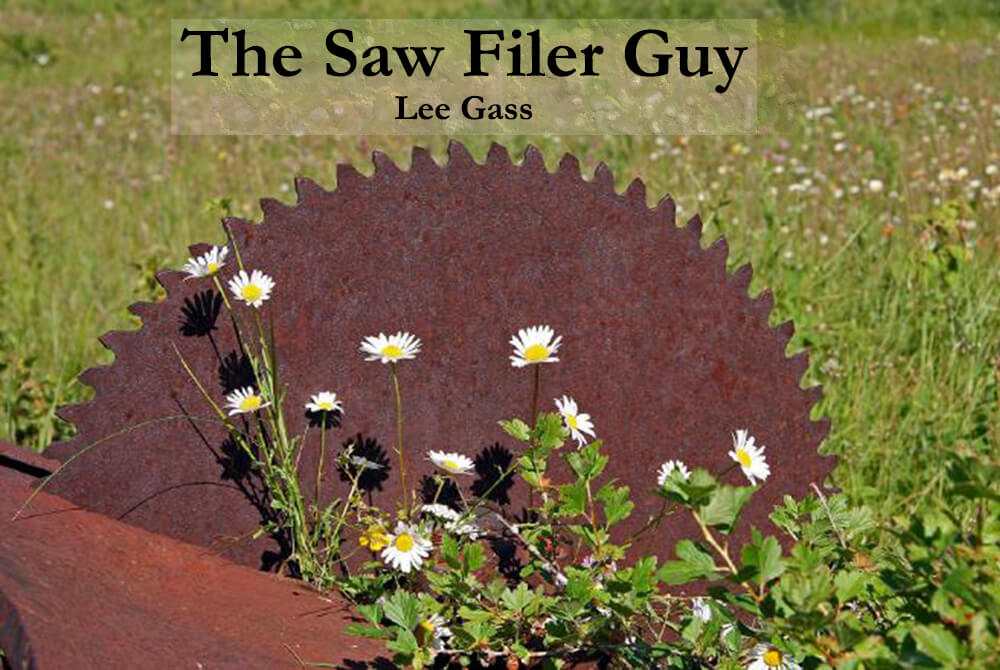 During my PhD
studies at Oregon I became
obsessed with how people get good at
what they do. I guess that’s not a surprise
given what I was trying to do for myself at the
time, but I kept looking for especially competent
people in all sorts of work, and when I found
them I did what I could to learn how they
got that way. This is the story of a
man I identify only as
Saw Filer Guy.

In addition to
being very good at what he
did at work he left much to be desired
in other aspects of his life and I don’t
want to embarrass him. Nor do I
want to dwell on those
other aspects.

I met Saw
Filer Guy at a family
gathering in Washington State.
He came with a distant relative and with
in minutes of meeting him I knew he saw him
self among the world five best professional saw
filers. He was proud of that fact, and made sure
I knew that those who maintain the giant band
saws in mills are paid more than anyone but
overall managers. I was impressed.  I had to
know more about Saw Filer Guy, so I kept
him talking about himself and listened.
He was incredible, actually, in the
strength and power of his self
promotion and I couldn’t
get quite enough
of it.

The gathering
retired to a restaurant/bar
paneled with rough-cut lumber and
Saw Filer Guy and I spent hours, literally,
examining individual boards in detail for
various kinds of evidence of poor filing of
the saw. Each board carried a record of
maintenance of equipment and I
learned to read the record
with a critical eye.

The evidence
made perfectly clear that
perfect saw filing would consist,
among other things, in making each
tooth perfectly identical to every other tooth.
Any tooth higher than others wears faster, gets
hotter, and tears rather than cuts the wood, no
matter how sharp it is at the beginning, and any
set farther to the side than others malfunction
similarly. Both kinds of errors leave tracks in
the wood and hasten failure of the blade,
and avoiding them is worth a
lot to a sawmill.

This line of
thinking led to the idea of
tolerance for error in the process,
so at a certain moment in the conversation
I asked “What tolerance do you work to, Saw
Filer Guy?”  He knew \exactly what I was asking
him and gave exactly the wrong answer, zero.
I work to zero tolerance.  My teeth are
exactly the same and my saws
don’t vibrate at all.

As a scientist
I knew that answer was
impossible in principle, impossible
to get anywhere near in practice, and
ludicrous even to consider. After all, remember,
we weren’t talking about the little saws that made
the boards we were inspecting, but the big saws
Saw Filer Guy maintained that cut eight
foot diameter douglas fir logs forty
feet long end to end in less
than a minute.

Fast-moving
loops of high-grade steel
a few sixteenths of an inch thick,
more than a foot wide, and bearing
hundreds of jagged, several-inch teeth on
both edges that cut both ways as logs glides
back and forth, run continuously four hours
at a time, and are replaced by fresh blades
for the next four hours while Saw
Filer Guy gets them ready
for the next round.

How could anything
like that be maintained to zero
tolerance?  I mean, really!  And so I said
“Come on, now, Saw Filer Guy! Zero is a pretty
small number.  I’m happy to believe you’re one of
the world’s five best saw filers and was convinced
you were good from the beginning. I wouldn’t
even have talked with you if you weren’t.
But zero? I just don’t believe
it.  Give me a break!”

He resisted for
as long as he could but
was smart enough to realize I
wasn’t going to let him out of it, and
I saw the look of resignation in his eyes
long before he came clean with the
truth, which was a long
time in coming.

Long before then,
he countered by asking me
how I knew enough about saw filing
to question his word on those matters
and I said I knew nothing at all about
saw filing and didn’t need to. I knew
a lot about zero and that alone
was enough to tell me he
was blowing wind.

That made
him mad, and he tried to
scare me off with bluster.  He told
me his family history and offered it as
proof of his perfection. His father and
grandfather had been renowned
saw filers in their day, and
he got his skill from
them.  Really?

“I understand
saw filing is a technical skill
that takes both ability and attitude.
I appreciate your gaining attitude from
your forebears, especially about your ability,
but saw filing has changed so much in the
industry since they were working that
you couldn’t have gotten your
ability from them.”

“How wide was
the kerf [the saw cut] in
the olden days and how wide is
it now? Did they even have band saws
when your Dad was working?” Saw Filer Guy
reluctantly confessed that there were only
circle saws back then, and modern band
saws are just a small fraction of the
thickness of anything they
had back then.

They make less
sawdust and make more
lumber from each log, and cut
faster, but are much more dangerous
if they break. Everywhere we went in our
talk made it increasingly clear that he would
either have to confess to working to
somewhat greater than zero tolerance or
punch me in the eye, and neither of
us was clear which way it
would happen.

Sometimes it got a little iffy.

When he
was well into his cups
and desperate, I let him off the
hook by motioning that I wanted to
whisper something in his ear and leaned
forward. When he leaned forward to meet
me I cupped my hand to his ear and asked,
just loud enough for him to hear me,
“When did you make your last
mistake at work?”

I thought he
would blow a gasket
right there in front of me!
He glared at me, trying to
decide how to respond
and I just waited.

Eventually he
changed his demeanor,
changed his attitude, lowered
his voice, and told me he had made
a mistake just the afternoon before but
“No one will ever find it because I found it
first and fixed it! Nobody ever finds my
mistakes!”  There it was. The core.
What Saw Filer Guy said last
was what made him good
and he didn’t want
to admit it.

I didn’t have
the heart to tell him how
easy it had been to find one of his
glaring mistakes, which was to claim he
worked to zero tolerance!  As I said in the
beginning, I had no need to embarrass him.
My need was to learn what made him
good at what he did and what
he said at the end said
loads about that.

The fact that
Saw Filer Guy found and
fixed his own mistakes reinforces the main
idea behind my story Work on the Ugliest Part.
If there’s a problem, find it and fix it before somebody else
does.  That principle underlies many of my stories, most
notably First and Last Words from the Trip Director,
An Exercise in Thinking, Writing, and Rewriting,
and Five Questions to Change your Life.

Other stories
describe challenges of
growing up wild in a wild world
and learning to live in it, where the same
principle applies as well.  The Wind Hoverer,
On the Diaper-changing Behaviour of Robins,
What a Relief!, A Small Matter of Maternity,
and The Deep Meaning of Creativity
all address that issue.  All of my
stories about Teaching &
Learning address it
for humans.

One thought on “The Saw Filer Guy: Heroes, Masters, and Wizards”